Articulating Surfaces of the Wrist

The carpal bones are the eight bones located within the wrist and form the radiocarpal, intercarpal, and carpometacarpal joints as stated above. The carpal bones allow for limited flexion, extension, radial deviation, and ulnar deviation of the wrist. From an anterior view of the wrist in anatomical position, the eight carpal bones are easily identifiable. The proximal row of four carpal bones listed from lateral to medial are the Scaphoid, Lunate, Triquetrum, and Pisiform. The distal row of carpal bones listed from lateral to medial are the Trapezium, Trapezoid, Capitate, and Hamate. A helpful mnemonic device that lists the bones in this order is: “Sam Likes To Push The Toy Car Hard.”

Distal to the carpal bones lies the metacarpus (meta = beyond), or palm, the intermediate aspect of the hand; this area is comprised of five bones called metacarpals. Each metacarpal bone is made up of by a proximal base, intermediate shaft, and a distal head – the distal heads are also readily available when one clenches their fists, showing off “knuckles.” Starting with the thumb and moving medially, the bones are numbered I to V. The proximal base articulates with the distal row of carpal bones to form the carpometacarpal joints; and, at the distal heads, they articulate with the phalanges to form the metacarpophalangeal joints.

Distal to the metacarpals are the phalanges (phalanx = a battle line), or rather, the bones of the digits. Again, like the metacarpals they are numbered I to V, moving from lateral to medial. There are a total of fourteen phalanges in the five digits of each hand; and, a single bone of a digit is referred to as a phalanx. Like the metacarpals, the digits are composed of a proximal base, intermediate shaft, and distal head. The thumb has two phalanges, whereas the rest of the digits have three. The phalanges are then broken down into rows, proximal, medial, and distal rows that of which respectively articulate with one another to form interphalangeal joints.

Extrinsic and Intrinsic Ligaments of the Wrist 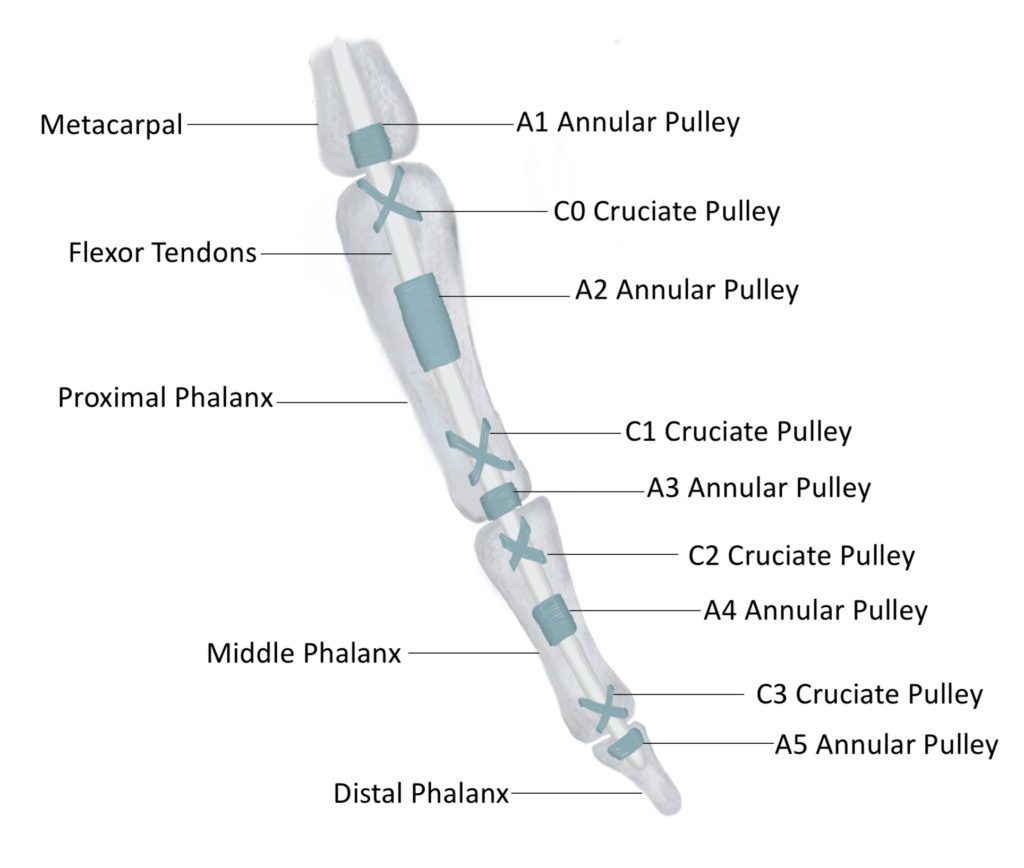 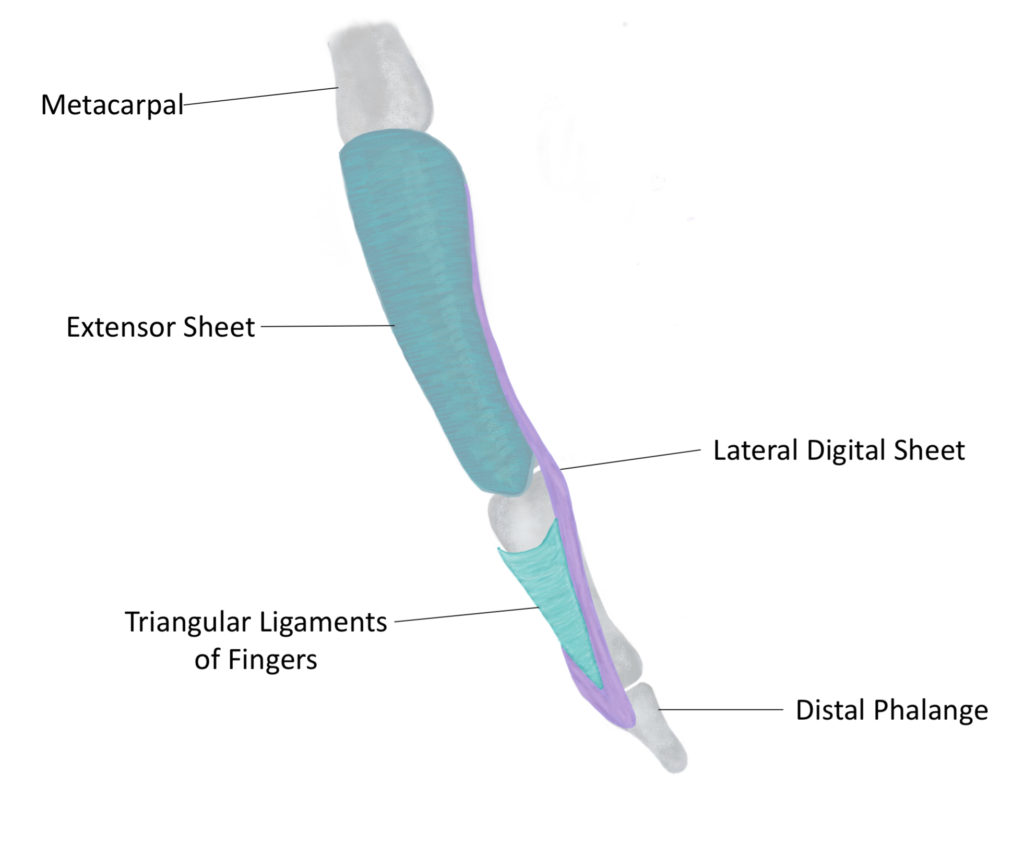 Ligaments of the Digits

The joints of the digits allow for movement in one plane. The digits can flex and extend, but cannot perform rotation or lateral movement. Each joint has specialized ligaments to prevent abnormal movement to avoid injury. Each joint has two Collateral ligaments associated with it. They are located on the lateral sides of each joint and prevent lateral movement.  The PIP joint contains a specialized ligament called the Volar plate. This ligament is on the anterior surface of the digits and connects the proximal and middle phalanx. The Volar plate prevents hyperextension of the PIP joint and provides stability. The picture below represents the PIP collateral ligament from a lateral view. 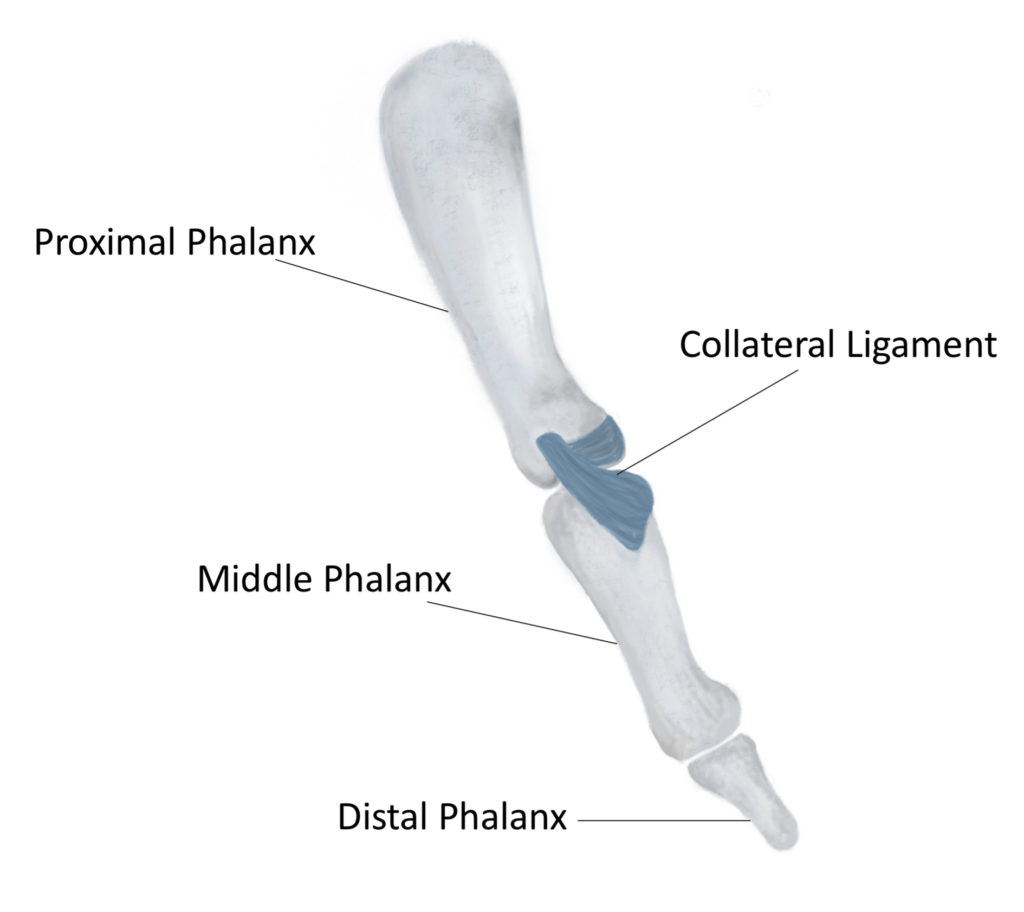