The Muscles of the Cranium

Temporoparietalis originates on the fascia superior to the auricule and inserts anterolateral epicranial aponeurosis. Temporoparietalis draws the epicranial aponeurosis towards the front of the cranium. It is innervated by the temporal branches of Cranial Nerve VII, the facial nerve. It is supplied by the superficial temporal artery and the posterior auricular artery.

SUPRAHYOID AND INFRAHYOID MUSCLES
The suprahyoid and infrahyoid muscles of the neck, except hypoglossus, will perform at least one of the 4 movements: elevation, depression, protrusion, and retraction. The movements in combination with each other can perform complex movements such as swallowing and phonation. The corresponding muscles on both sides of the neck contract together to achieve their desired outcome. 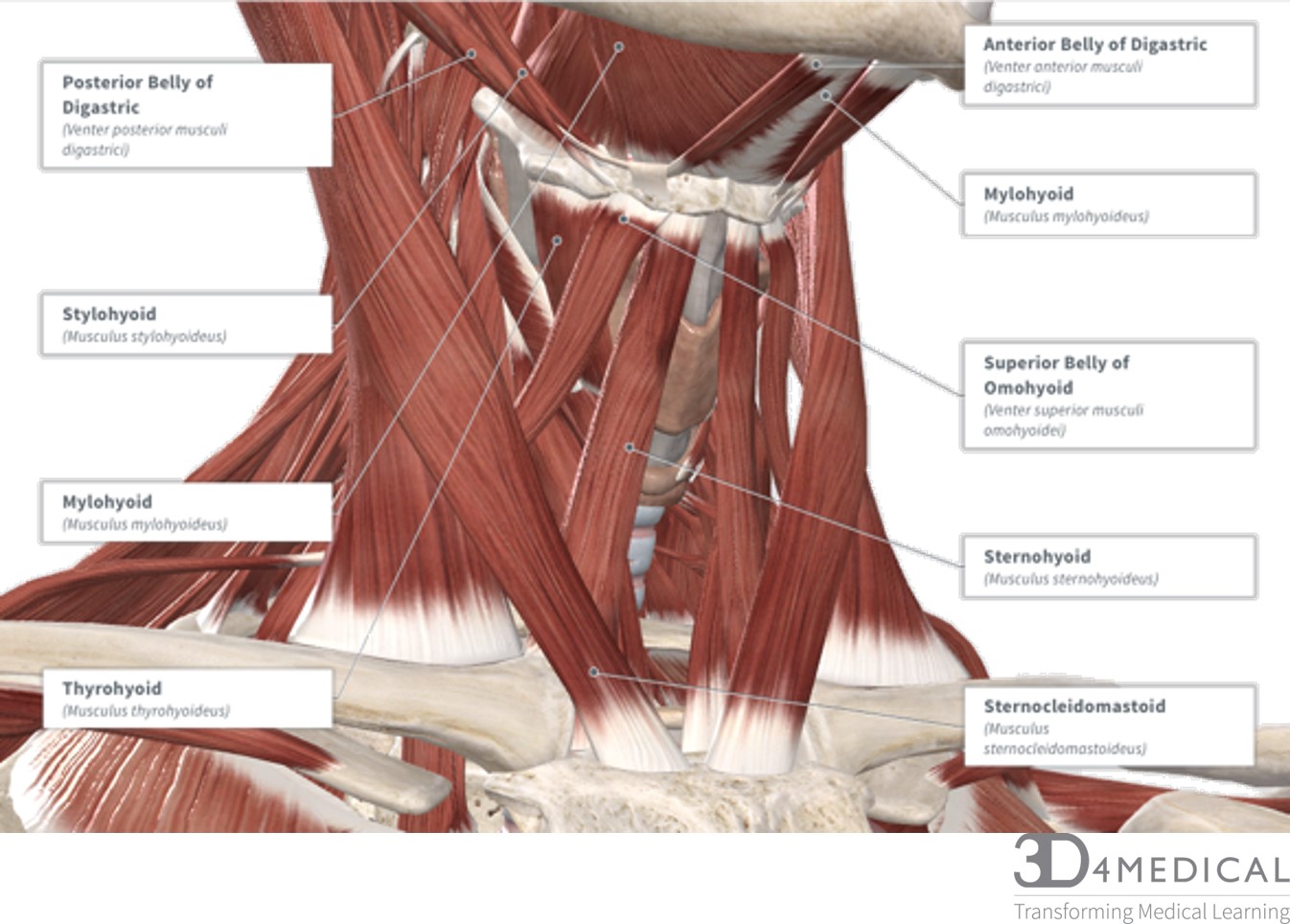 SUPERFICIAL ANTERIOR MUSCLES OF THE NECK 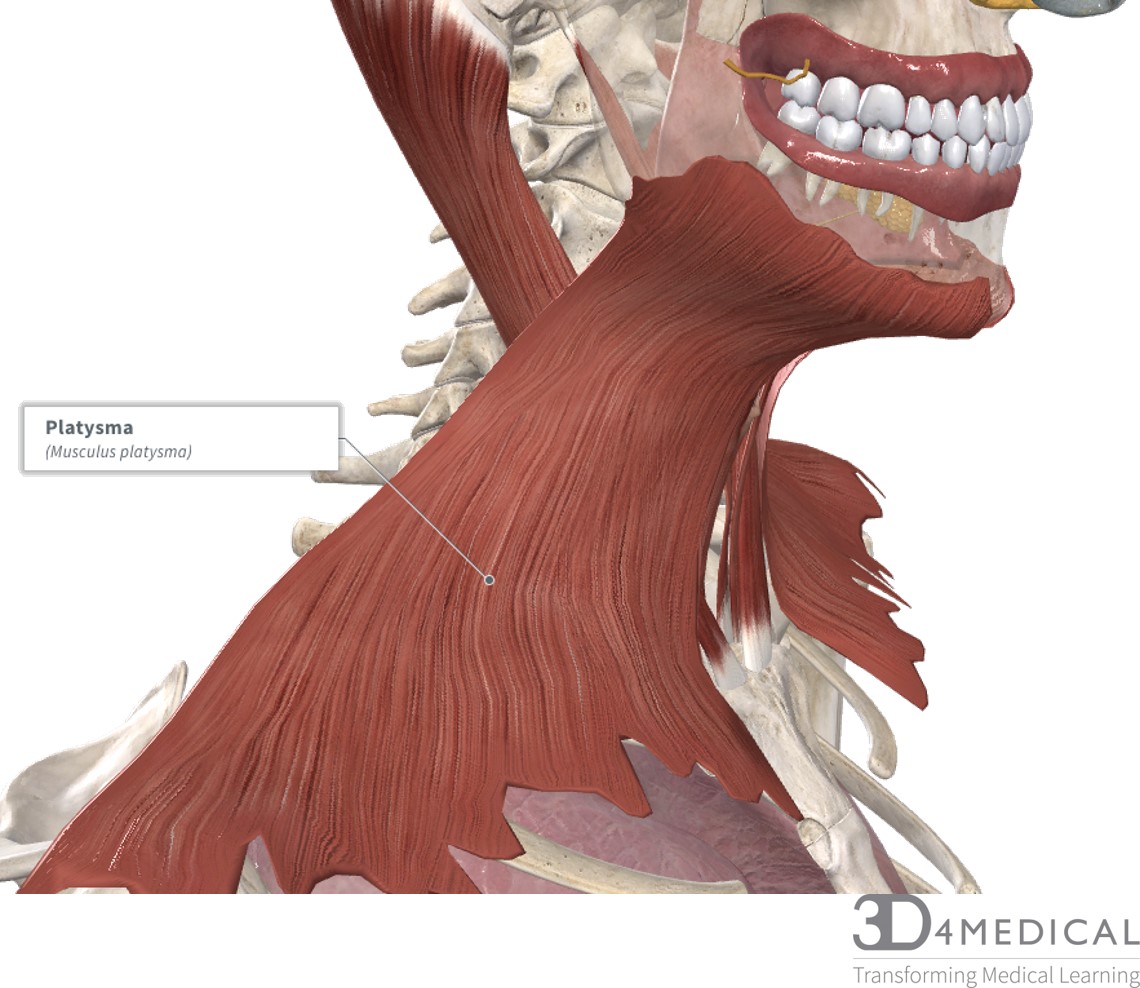 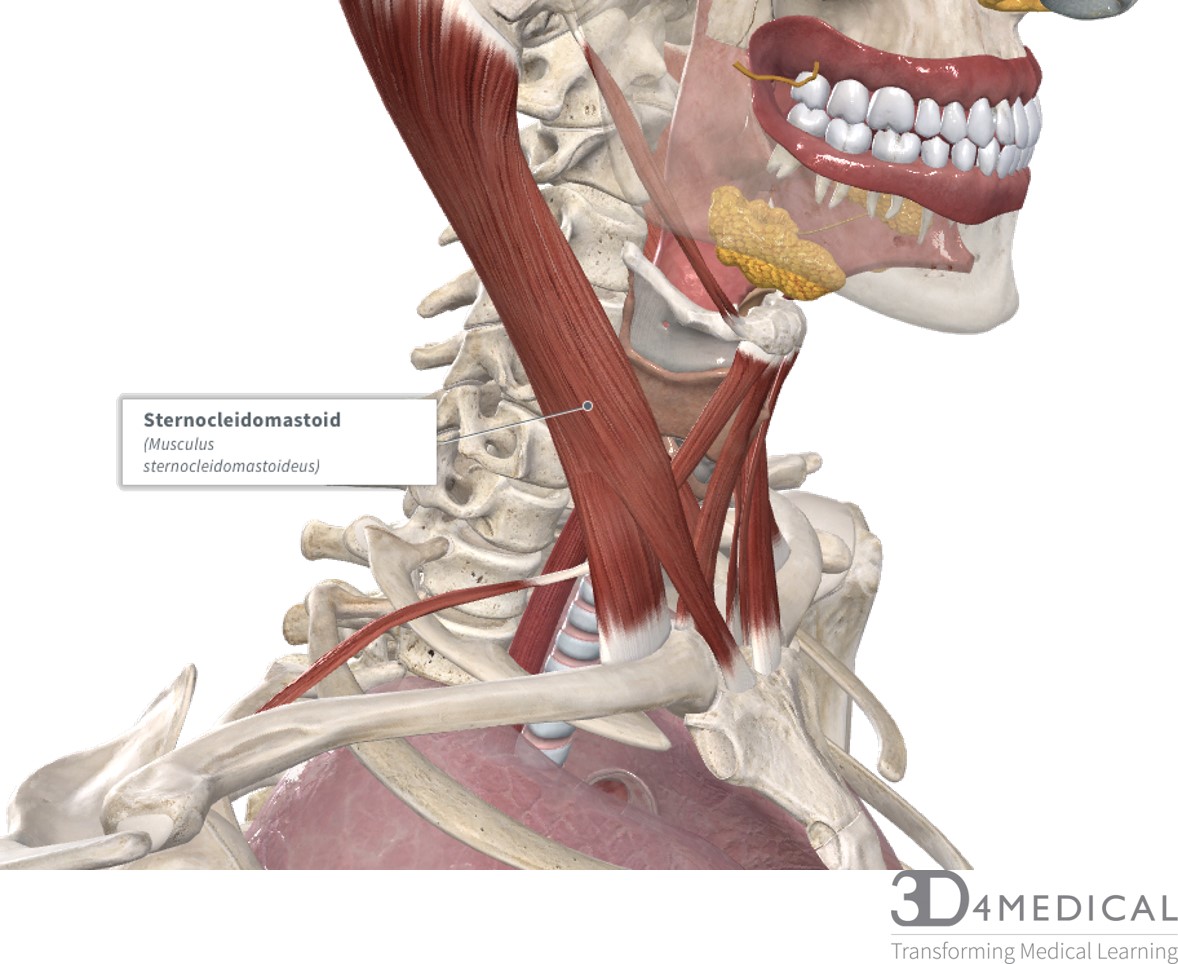 The muscles surrounding the larynx either insert or originate on the laryngeal skeleton or the hyoid bone. This means that these muscles aid in swallowing and positioning the vocal cords. 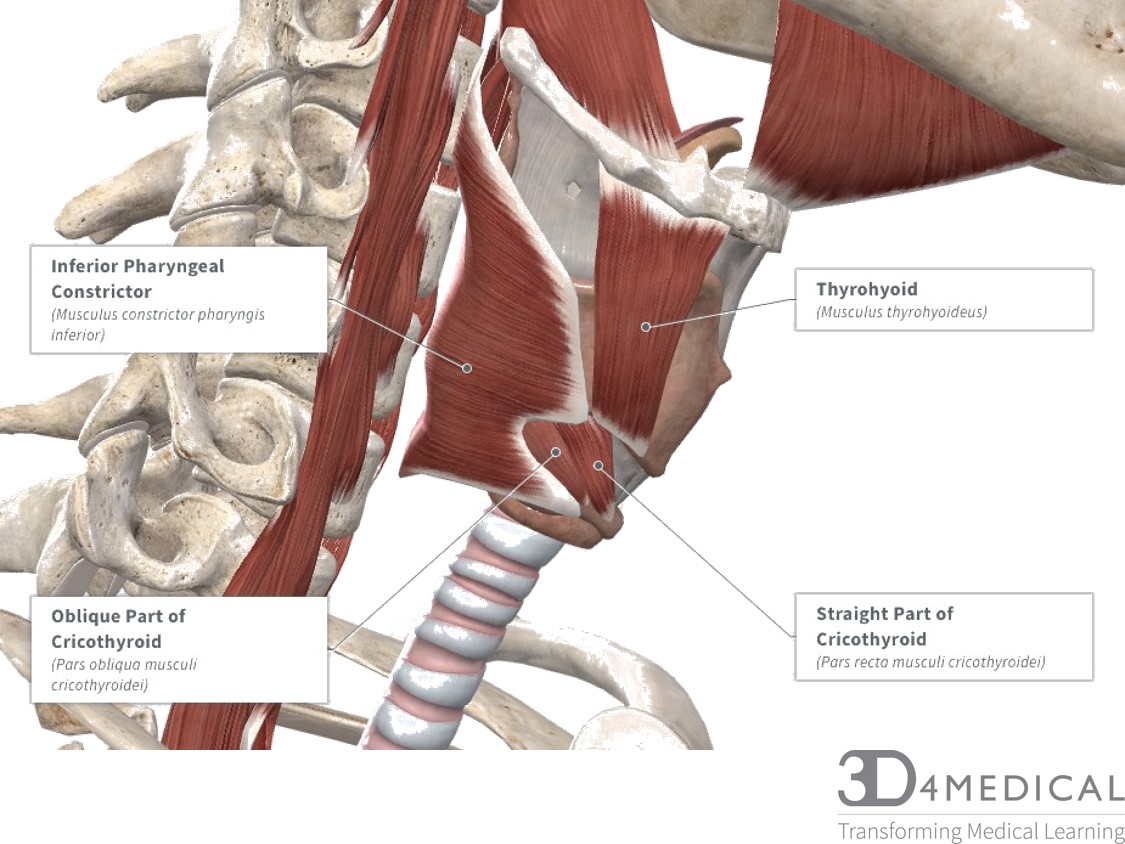 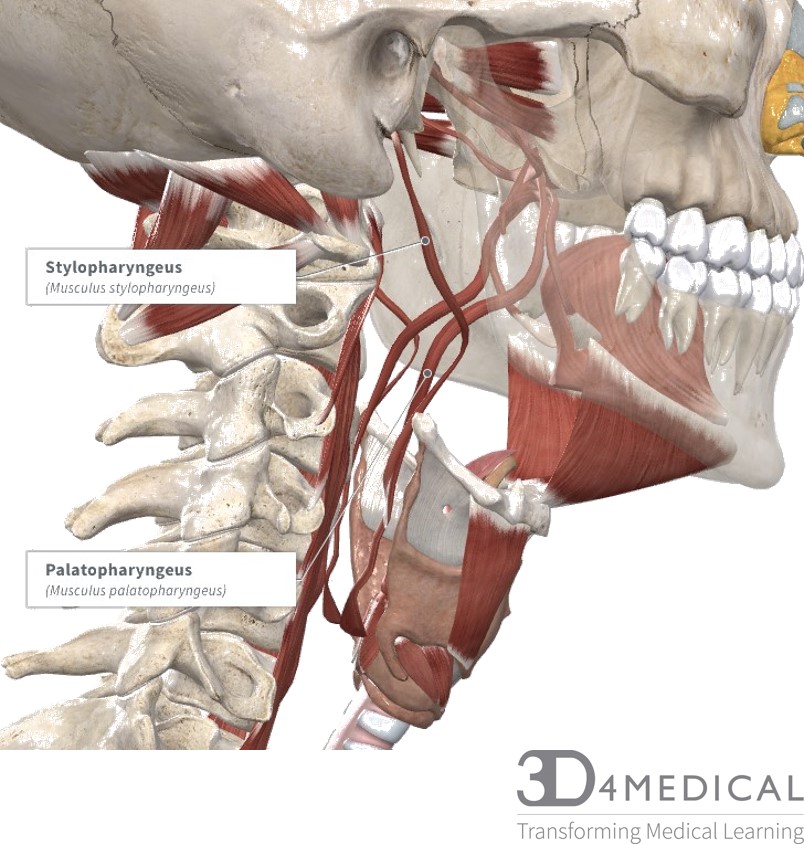 INTRINSIC MUSCLES OF THE THYROID CARTILAGE

The intrinsic muscles of the larynx are deep to the thyroid cartilage and the median thyrohyoid ligament. The actions of these muscles dictate the voice.

The internal and external thyro-artyenoid muscles change the vocal pitch by either contracting or relaxing. In isolation, the contraction of these muscles lowers the resonant frequency of the vocal folds. 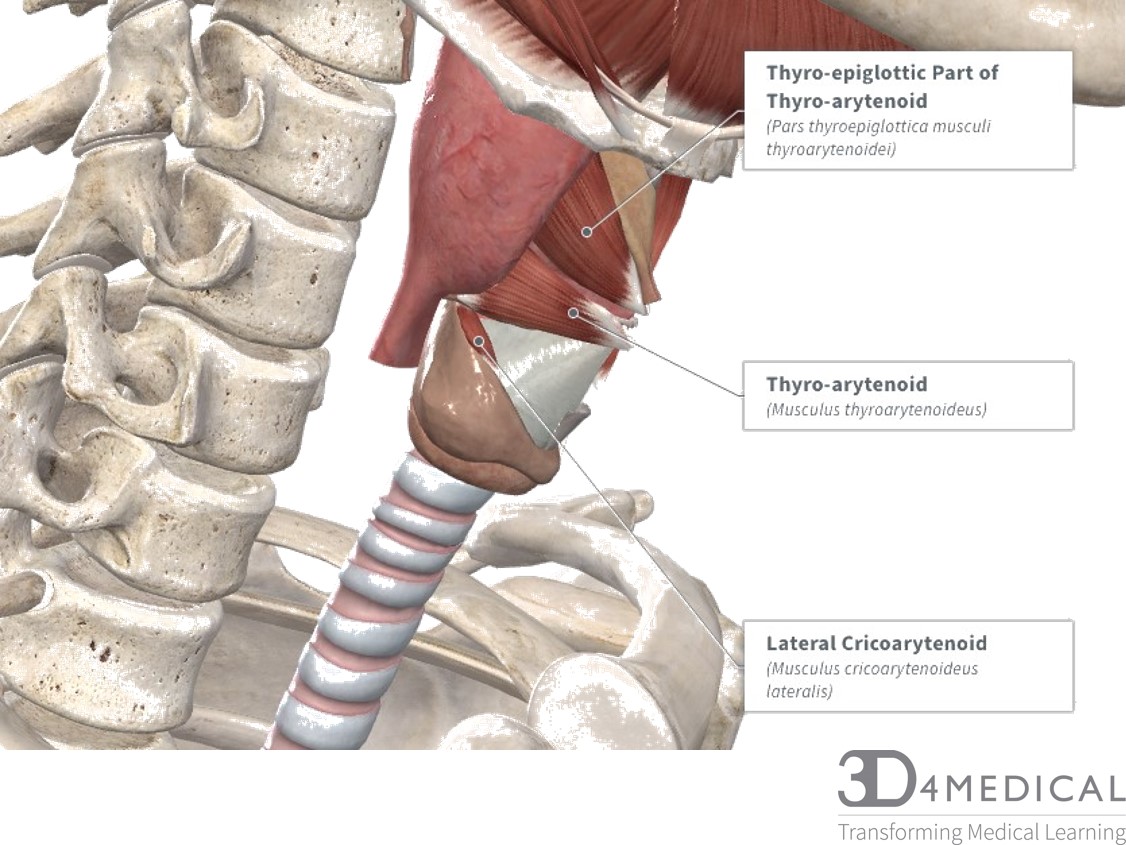 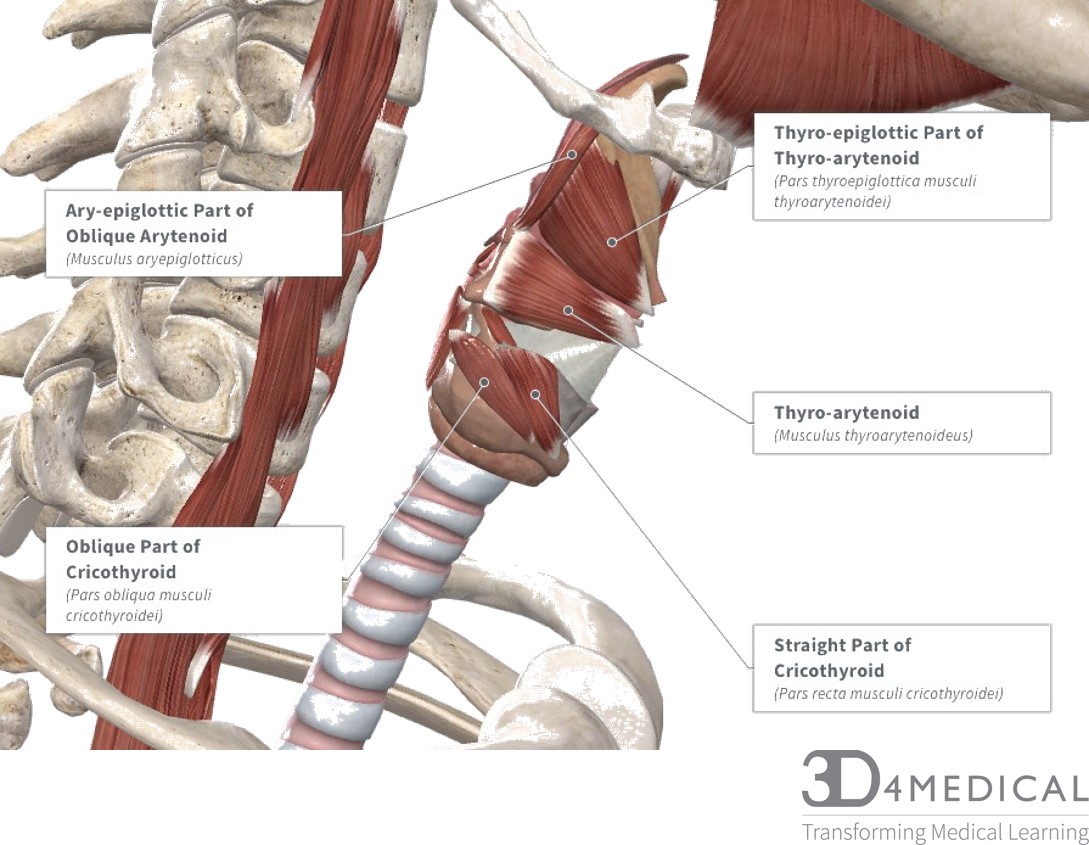 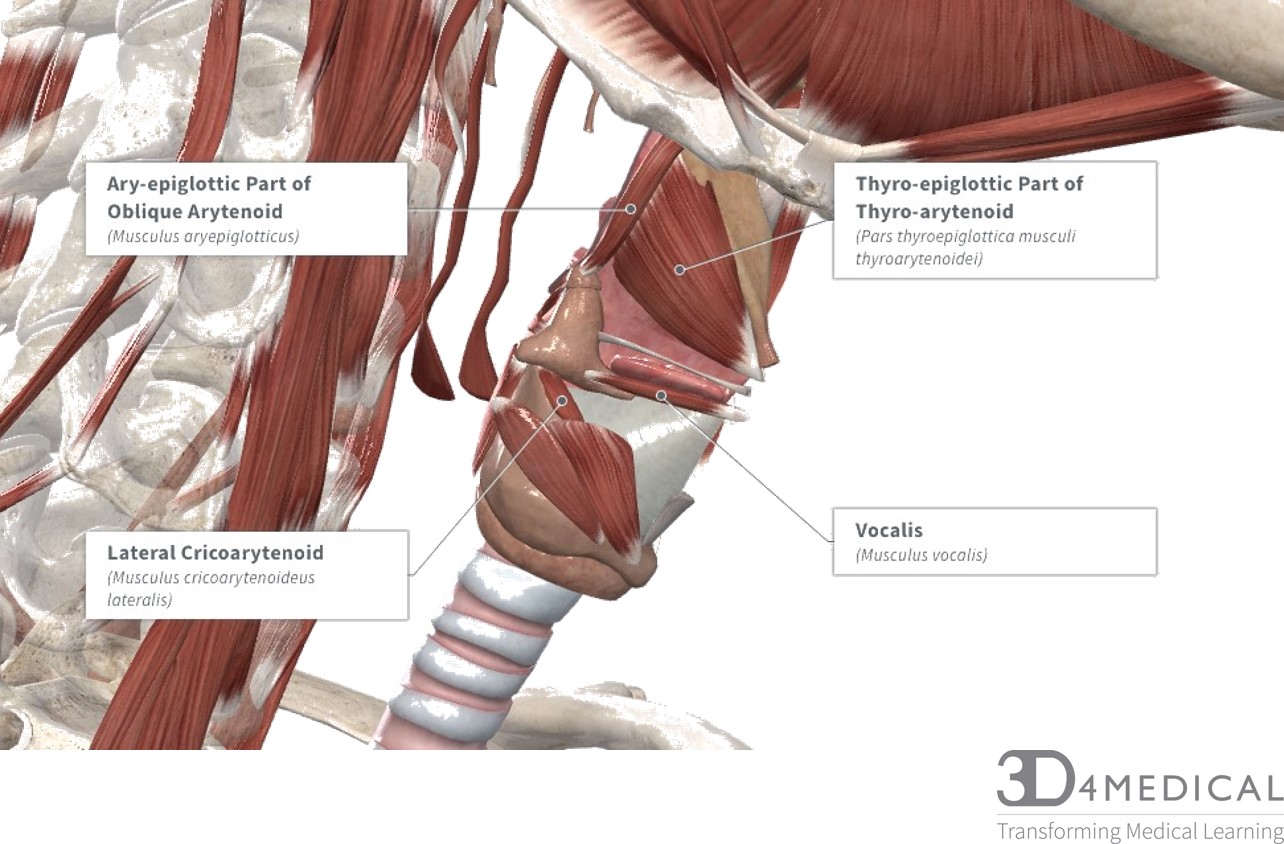 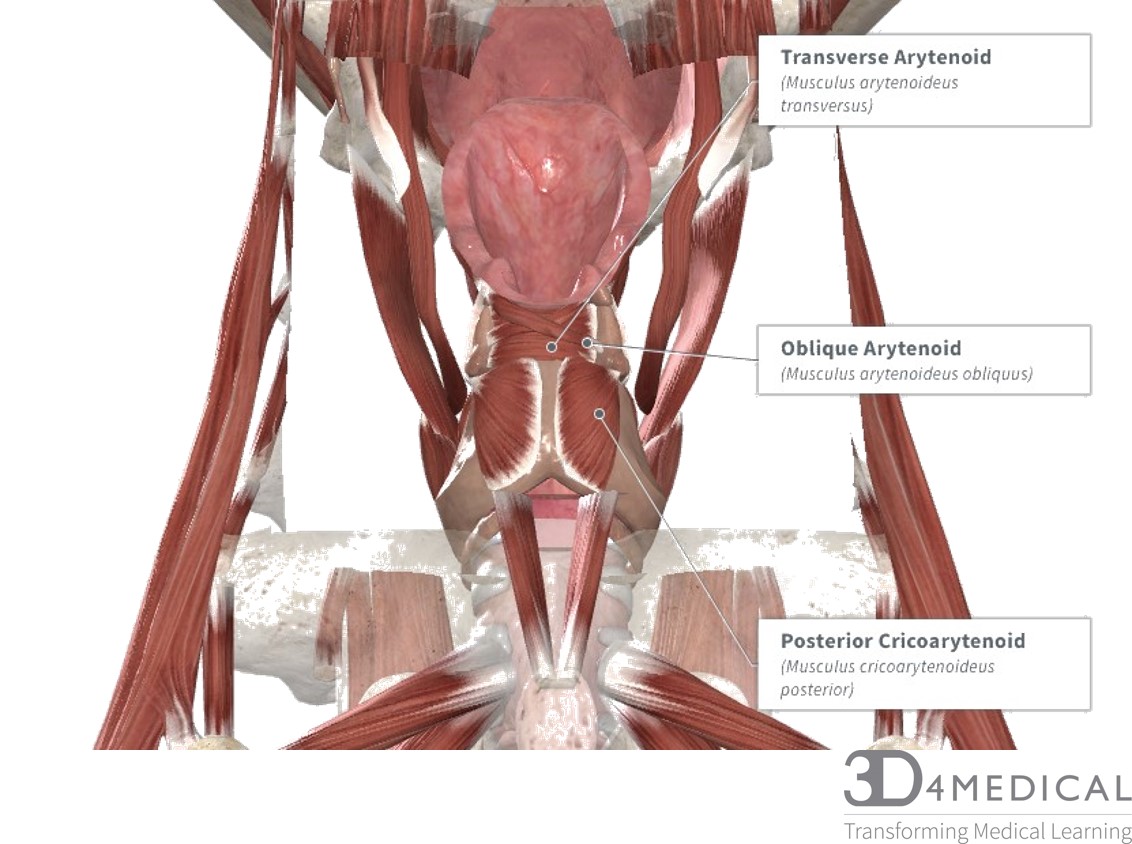 Posterior muscles of the cervical spine primarily cause neck extension and assist in holding the head in an upright position and are often exercised in unison. All muscles have mirror images on the left and right side of the neck and when both are activated at the same time, the head and neck will move as indicated in the table below. However, when used separately, each muscle can move the head in a lateral motion (ipsilateral, same side of the body) with the angle depending on points of origin and insertion.

In the table below muscles are grouped by their location (superficial to deep, medial to lateral and superior to inferior) and function. The Trapezius (truh-pee-zee-uh-s) and Levator Scapula (see Figure below) are relatively superficial and both cause neck movement as well as the elevation of the scapula. 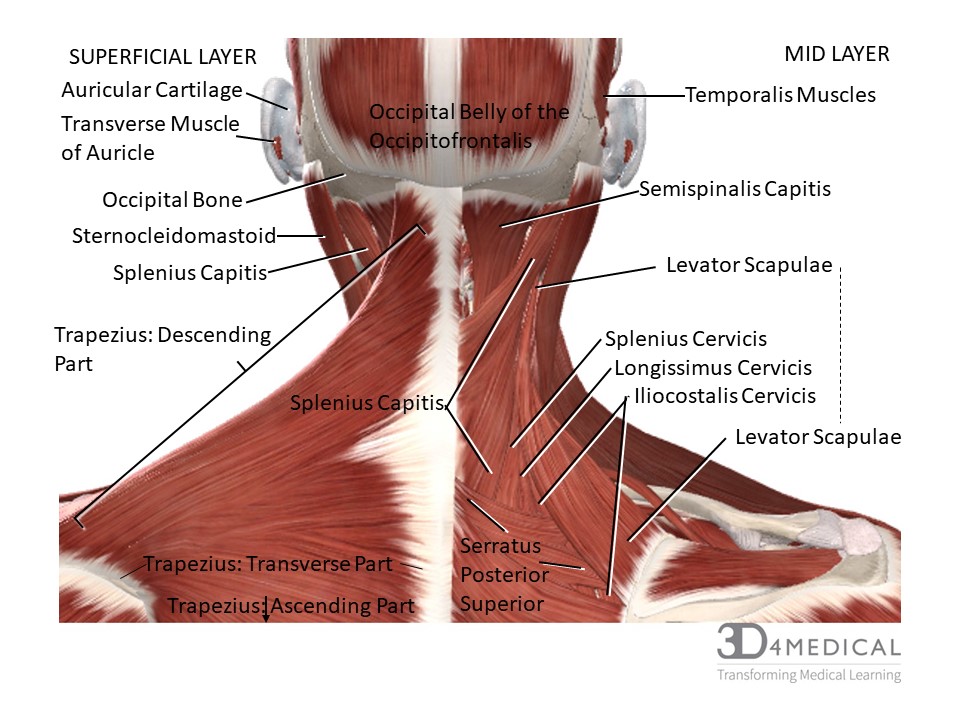 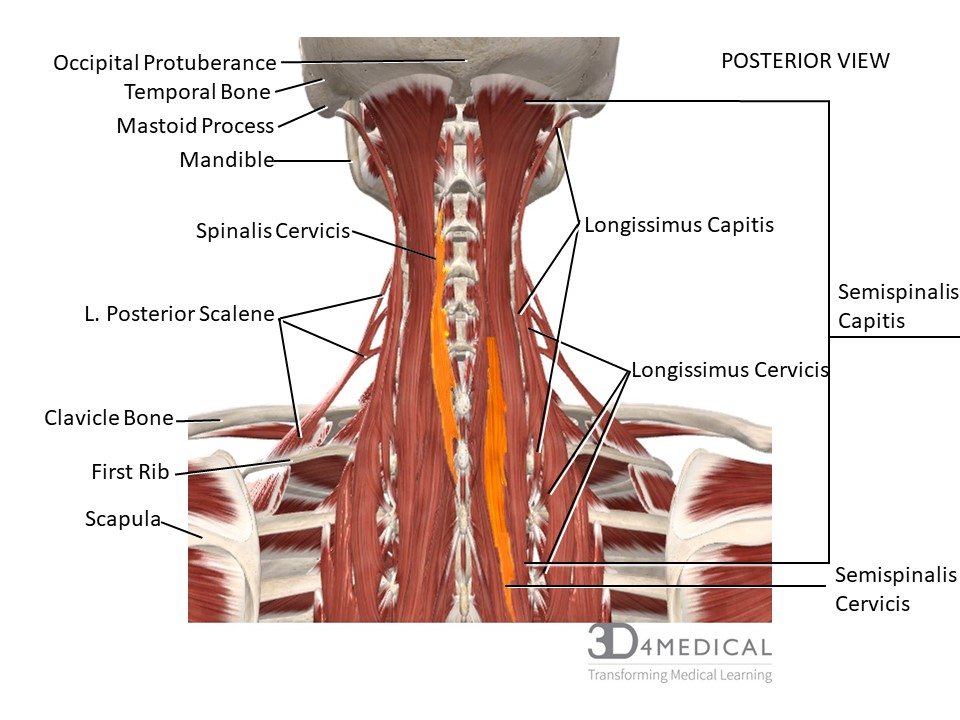 Below is an image giving perspective on how the many muscles of the head attach to the skull. Some of these groupings include muscles for movement of the head and neck, for mastication (chewing), and for some facial movements. 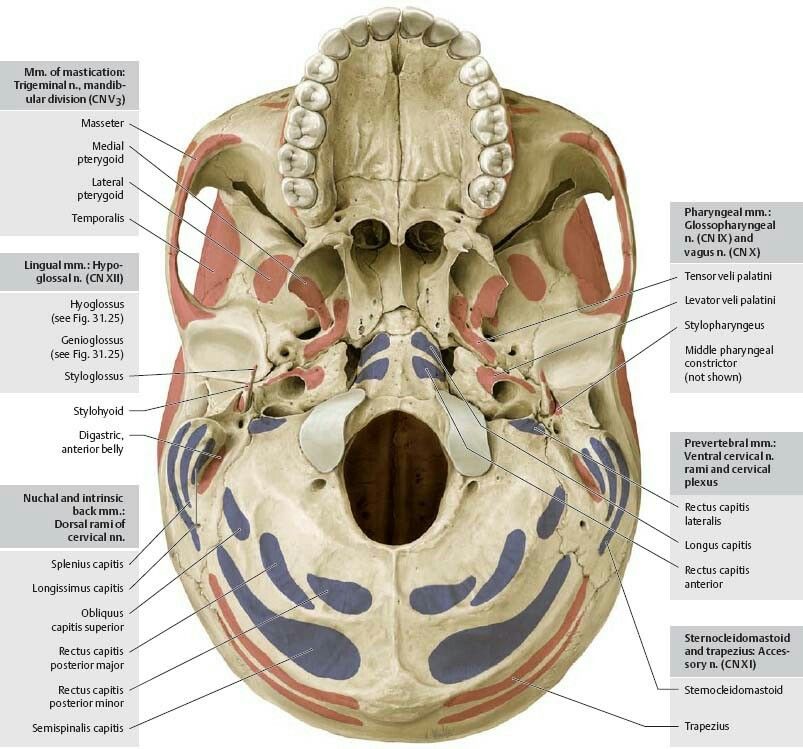 Add to your learning of the muscles that move the head and neck:        https://www.getbodysmart.com/neck-muscles 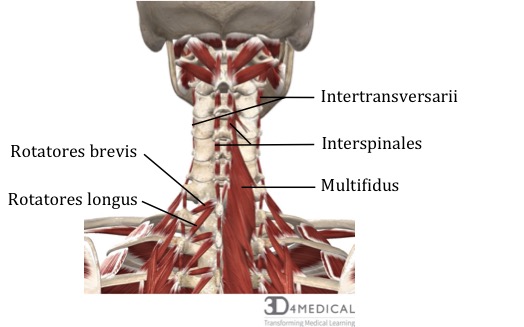 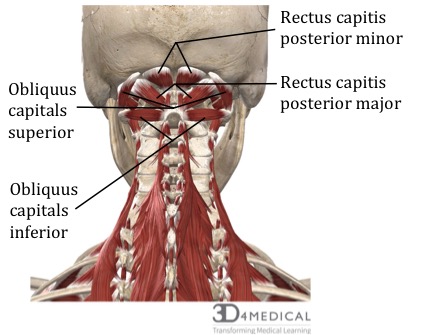 Longus Colli: The longi colli muscles are made up of three parts (the superior oblique portion, the medial vertical portion, and the inferior oblique portion). It is found on the anterior part of each vertebra between the atlas and third thoracic vertebrae. This muscle is broad in the middle and narrow at either end. These muscles are often injured in rear whiplash accidents (This will be covered further in the common injury section). 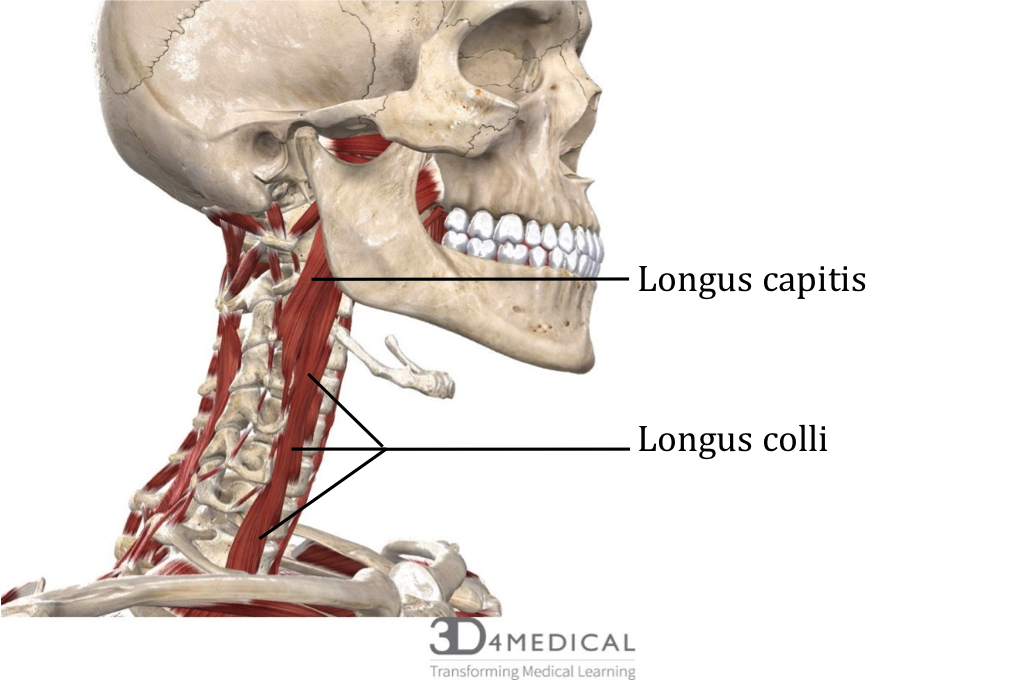 Longus capitis: The longus capitis is broad at the superior end and narrow below where it attaches to the tubercles of the anterior transverse processes.