The pectoral girdle or shoulder girdle consists of four bones that connect these supporting bones to the trunk. The pectoral girdle is made up of two clavicles and two scapulae which are the anchors that attach the “appendicular” skeleton to the “axial” skeleton. There is only a single “true” anatomical joint between the pectoral girdle and the axial skeleton, and that is the sternoclavicular joint. It is considered a true anatomical joint because of its bony articulation between the clavicle and the manubrium of the sternum. In contrast, the scapulae are considered a false joint because it articulates with the thoracic cage at the scapulothoracic joint which is the only muscular connection between the scapula and the thoracic cage. It is important to note that false joints are not actual joints, they just display a different form of articulation between the bones. This design of the pectoral girdle allows for the greater range of motion from the shoulder attributed to this region. However, this does come at the cost of lessened stability.

The next true anatomical joint is the acromioclavicular joint. As the name implies this is an articulation where the lateral end of the clavicle and the acromion of the scapula. Much like the sternoclavicular joint, the acromioclavicular joint is a synovial joint, surrounded by an encapsulating synovium. The acromioclavicular joint is surrounded and supported primarily by 4 major ligaments superiorly and inferiorly. The superior portion attaches to the superiorly onto the trapezius and deltoid muscle tendons. The inferior portion of this ligament is slightly thinner and attaches to the bottom of the articulating surfaces of the clavicle and the scapula; it is connected to the tendon of the supraspinatus muscle. The next ligament is the trapezoid ligament which is anterior and lateral, connecting the coracoid process and the clavicle. The final ligament in this joint is the conoid ligament which is posterior and medial relative to the trapezoid ligament that also connects the coracoid process of the scapula to the conoid tubercle on the inferior aspect of the lateral third of the clavicle. The last two ligaments are generally grouped together as the coracoclavicular ligaments and are technically not a part of the acromioclavicular joint but do perform accessory functions for it. This joint surrounding all these structures can be described as a “gliding” joint. It allows the scapula to protract, retract and slightly elevate and depress, as well as its rotation with the transverse axis of the body, this final action happens when lifting your arm up directly by your side.

The final joint we come to in this section of the pectoral girdle is the glenohumeral joint which is sometimes referred to as the scapulohumeral joint.  When discussing the “shoulder joint”, the glenohumeral joint is what is generally being referred to. This joint is formed by the articulation of the glenoid cavity, sometimes referred to as the glenoid fossa, and the round head of the humerus. The most distinct observation one could make observing those two bony structures on their own is that the glenoid cavity is much smaller in surface area than the humeral head. However, the glenoid labrum a fibrocartilaginous ring in the fossa deepens this cavity to increase the surface area of the joint. The glenohumeral joint is encapsulated by a synovial membrane and a fibrous capsule. The fibrous membrane originates on the anatomical neck of the humerus and encloses the whole joint. Along the exterior lining of the capsule are bursae, which provide cushioning with fluid-filled sacs that reduce friction when the joint is moving, allowing for smoother motion. There are two bursae locations, relative tot he subscapularis muscle is the subtendinous bursa, and superiorly, is the subacromial bursa located beneath the acromion process. 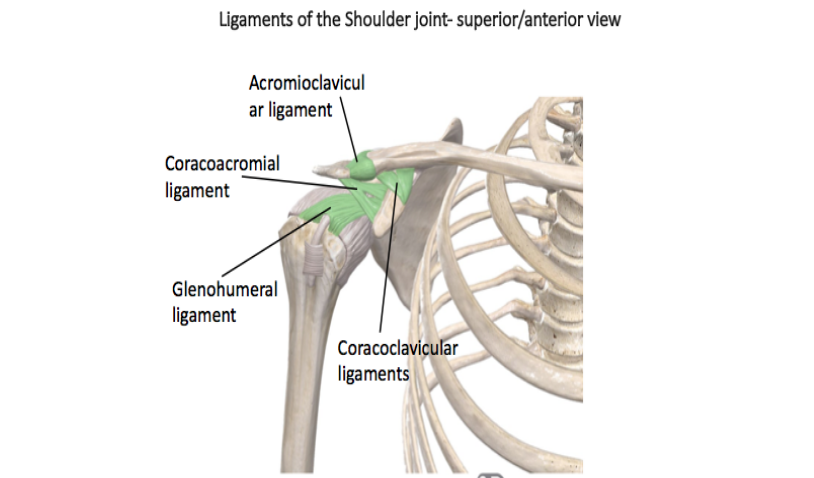 Figure 1. Diagram demonstrating the superior view of the shoulder ligaments. 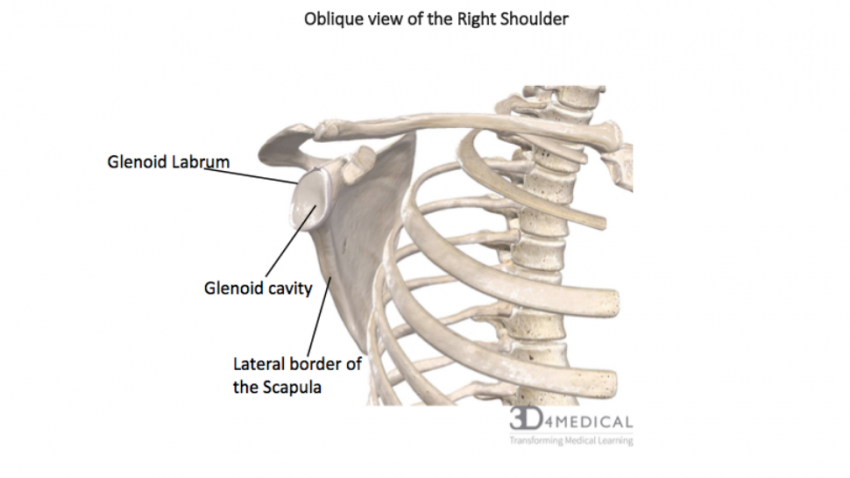 Figure 2. Diagram demonstrating the oblique view of the scapula and glenoid features. 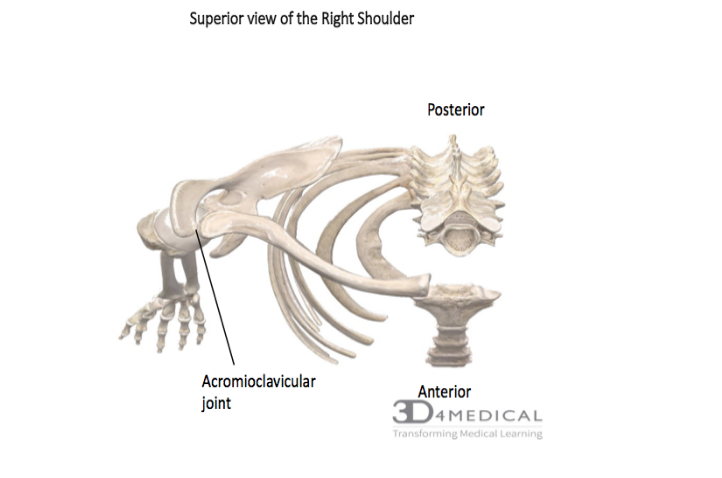 Figure 3. Diagram demonstaring the superior view of the acromiovlavicular joint of the shoulder. 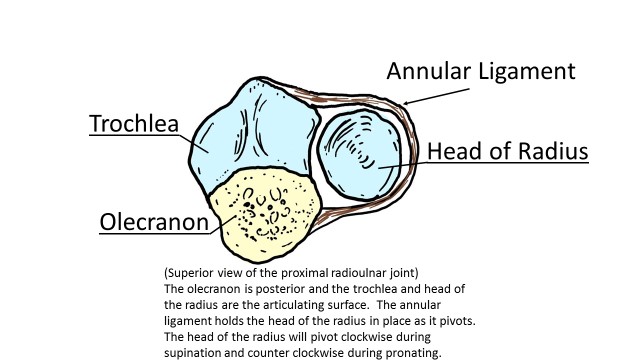 At the distal end of the ulna and radius, is a similar joint set up. The distal radioulnar joint which is a pivot diarthrosis joint, which allows for more movement compared to the then the proximal radioulnar joint. When the pivoting motion is produced from both the proximal and distal end of the joint, it adds to the motion of pronation and supination of the hand.  Attached to the styloid process of the ulna and medial edge of the ulnar notch is the triangle ligament. This ligament ensures that the radius follows the proper path as it pivots around the head of the ulna. 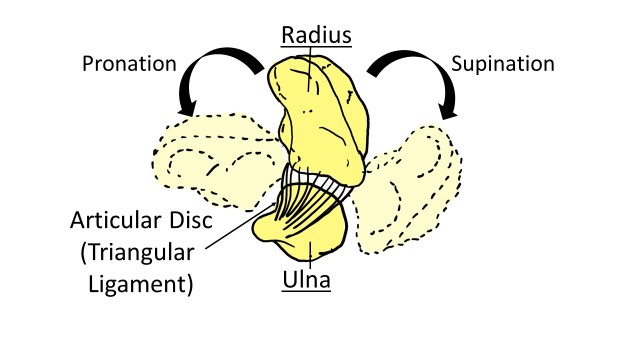 Figure 4. Diagram demonstrating the ligaments involved during the pronation and supination of the elbow.

There are four main ligaments that work to stabilize and reinforce the articular capsule of the elbow joint. The ulnar collateral ligament is on the medial side of the elbow joint and connects the coronoid process and the olecranon process to stabilize the medial surface. The radial collateral ligament connects the lateral epicondyle of the humerus to the annular ligament and provides stabilization of the lateral surface of the elbow joint. The annular ligament wraps over the radial head and binds it to the ulna. The triangle ligament attaches to the styloid process of the ulna and the edge of the ulnar notch which allows for the radius to move during pronation and supination. Between the radius and ulna is the antebrachial interosseus membrane which is a fibrous sheath that provides stability to the forearm and the radioulnar joints. 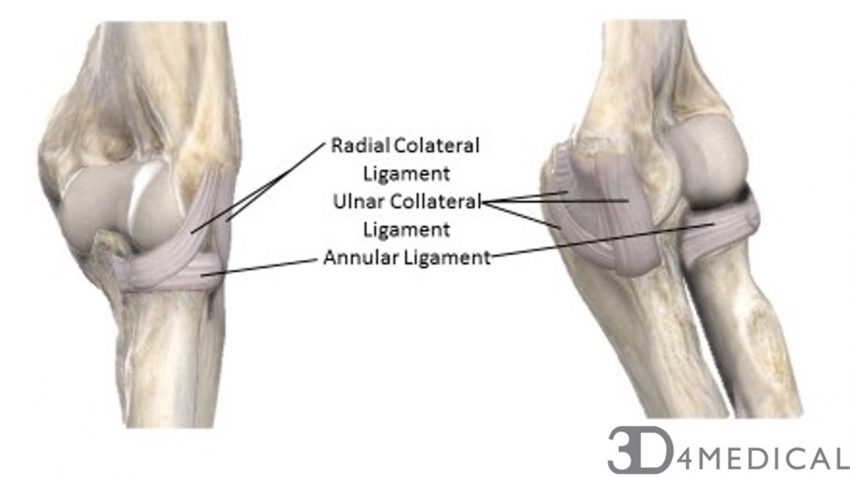 Details of the hand can be found in the hand section