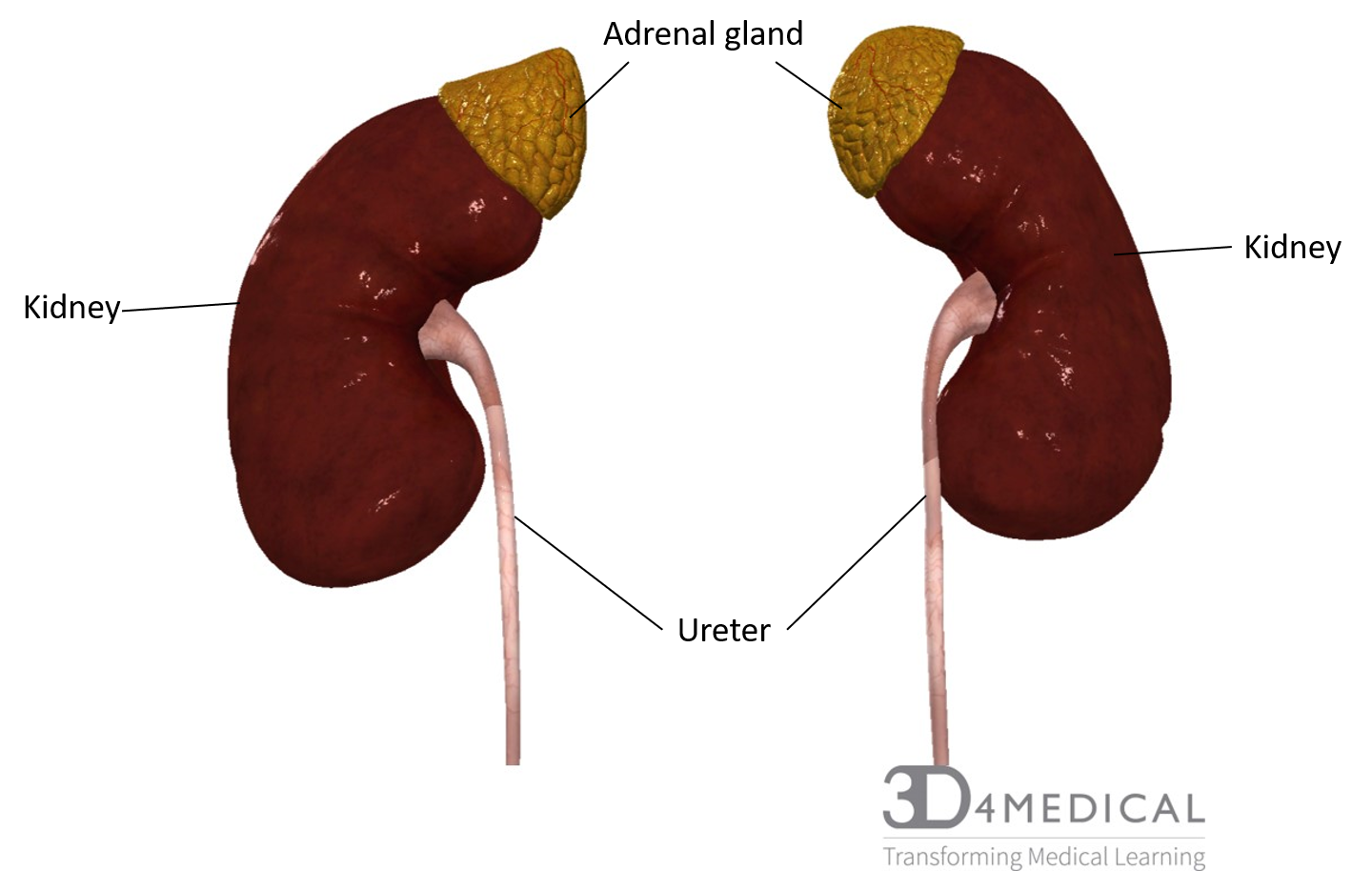 The adrenal gland is a yellow, pyramid-shaped gland that sits on top of each kidney. Since they sit on top of the kidney’s superior border, the adrenals can be referred to as the suprarenal gland. The adrenal glands are connected to the kidneys via the dense fibrous capsule that firmly holds the two organs together. The adrenals are also located near the 12th rib and the diaphragm with major arteries and veins in close proximity as they run along the posterior wall of the abdominopelvic cavity. Since it is an endocrine organ it is important that is highly vascularized, this will allow for the secreted hormones to affect the body. The adrenal gland had two key layers, the adrenal medulla and adrenal cortex.

The adrenal medulla is the deep layer of the adrenal gland. The medulla is often a grey-pink colour due to the abundance of blood vessels and connective tissues. The medulla is responsible for the secretion of two hormones. From specialized cells epinephrine, also known as adrenaline, and norepinephrine, also known as noradrenaline, are produced. Each hormone is produced by one cell with evidence showing that the two types of cells are found in different areas of the adrenal medulla and that they are independently controlled. 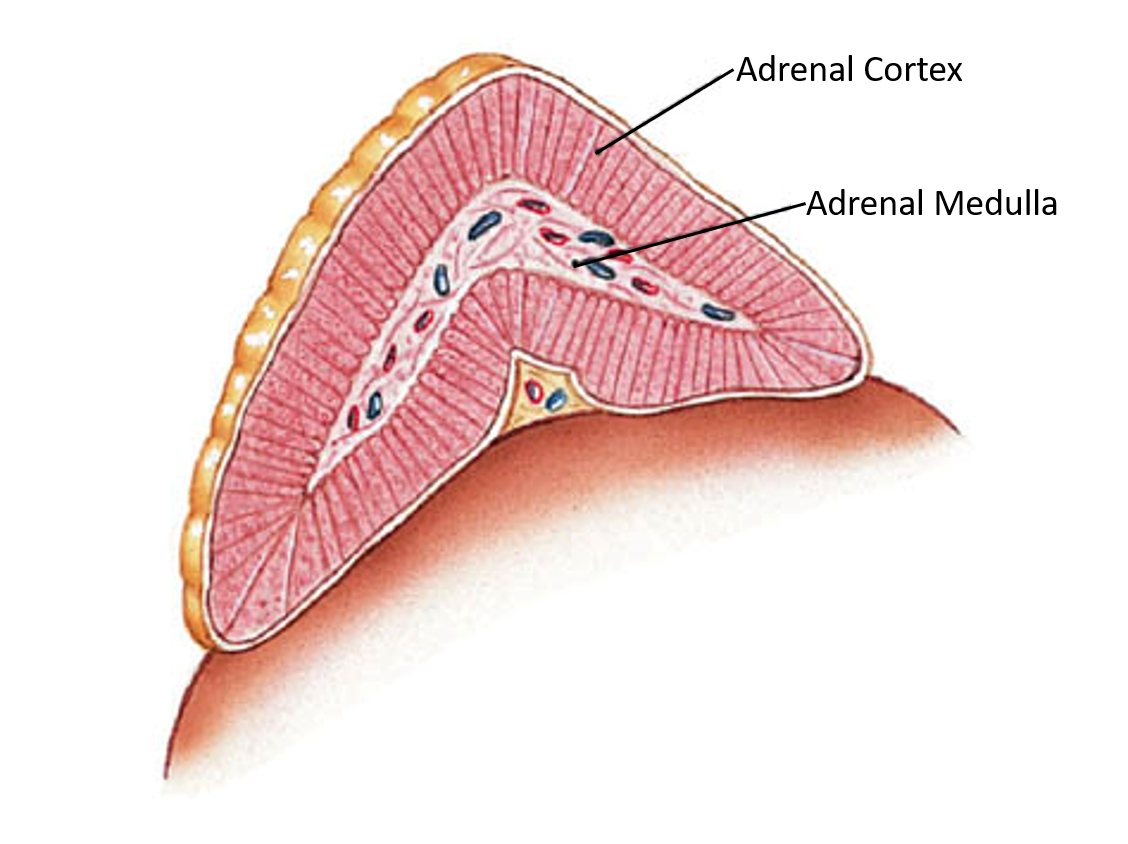 The adrenal cortex has a more complex role when it comes to the endocrine functions. It is responsible to produce corticosteroids which can be broken down into three groups that are associated with the zone that produces them. These zones are the Zona Glomerulosa, Zona Fasciculata and the Zona Reticularis.

The Zona Fasciculata is responsible for the production of the group of hormones called Glucocorticoids. Glucocorticoids are a group of steroid hormones that affect glucose metabolism. When the zona fasciculata is stimulated by ACTH, a pituitary hormone, the secretion of cortisol also known as hydrocortisone. Cortisol is the primary hormone in the glucocorticoid, with corticosterone and cortisone also released in smaller amounts. Cortisol is often referred to as the stress hormone, but unlike epinephrine and norepinephrine, the stressor is not a single short-term event. In times of long-term stress, cortisol helps control blood sugar levels, regulate metabolism, reduce inflammation and assist in memory formulation.

In today’s world chronic stress is commonplace, with people stressing about finances, school, work, family and ironically health. Although cortisol can be helpful in short bouts of chronic stress, it can be damaging when high levels are maintained over a long period of time. In this short video by DNews explains the effect of long-term stress. 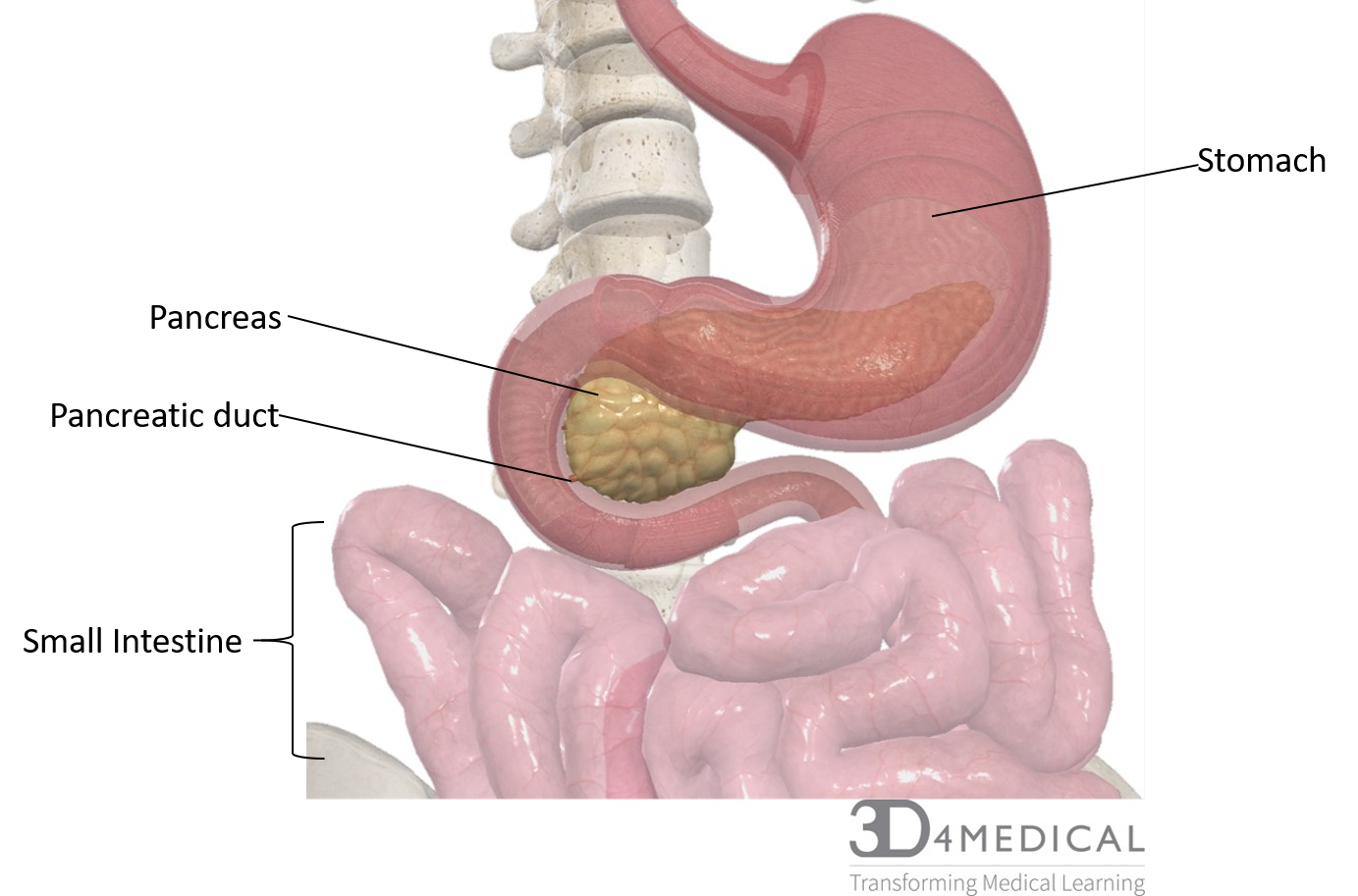 The pancreas is both an exocrine digestive organ and endocrine, playing a major role in internal metabolism and external digestion. The pancreas is part of the retoparitanemum as it sits deep to the stomach and proximal portion of the small intestine called the duodenum. The pancreas is long, slender, lumpy and pale organ ranging from 20-25 cm long with an average weight (in adults) of 80g. There are three sections to the pancreas, the head, the body and the tail. The head fits into the loop formed by the duodenum. The body it the middle section that extends toward the spleen, this section forms the long slender shaper of the pancreas. Lastly, the tail is the most lateral section of the pancreas and forms a short, blunt, rounded end of the pancreas.

The endocrine functions of the pancreas are based on a cluster of cells called the pancreatic islets or the islets of Langerhans.  Although only about 1% of the pancreas is made up of the islet of Langerhans, a typical pancreas can contain 2 million islets of Langerhans. They are four different types of cells in the islet of Langerhans, these cells are called Alpha cells, Beta cells, Delta cells and F cells. Alpha cells and beta cells are responsible for regulating the blood sugar levels. Delta cells produce peptide hormone identical to growth hormone- inhibiting hormone (GH-IH) which suppresses the release of glucagon and insulin.  A peptide hormone released from the delta cells also slow the rated of food adsorption and enzyme secretion along the digestive tract. The second cell type found in the Pancreatic acini is the F cells. The F cells produce the hormone pancreatic polypeptide (PP) which inhibits gallbladder release of bile and regulates the production of some of the pancreatic enzymes. This is thought to help to control the rate of nutrient absorption. 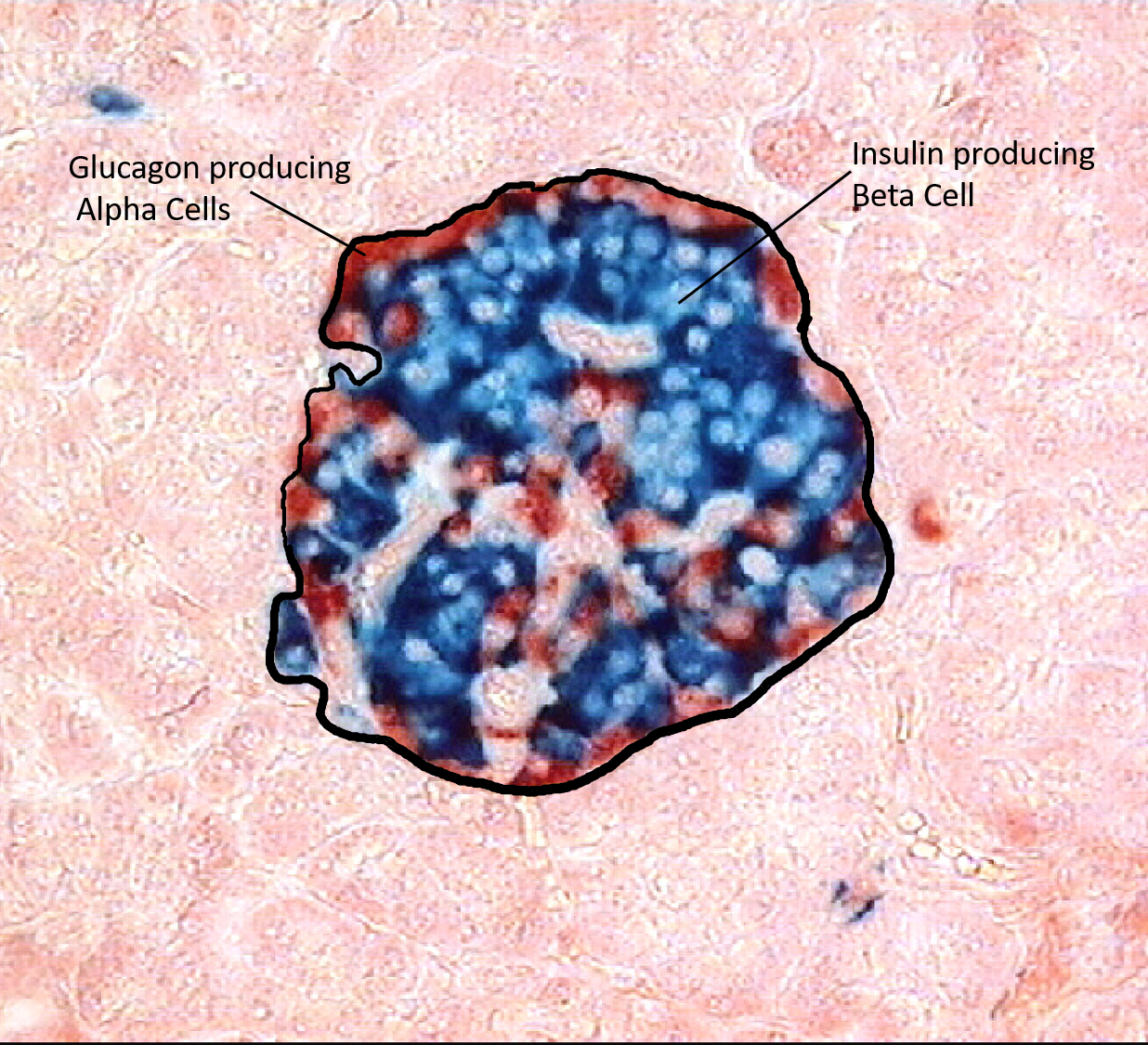 Image of an islet of Langerhans that is died to show where the hormones are found.

The pancreas is responsible for hormones that are responsible for the metabolism of the glucose in the blood. The two main hormones are insulin and glucagon. They work together to regulate blood sugar levels. These hormones are produced in the islets of Langerhans by specialized cells. The beta and alpha cells.  Together these two hormones work to maintain a normal blood sugar level ranging between 70-110 mg/dL of blood. This is done through be each hormone’s effect on lean tissues, adipose tissue, and liver.

Insulin is a peptide hormone that is responsible for the reduction of high blood sugar, secreted by the beta cells. To drop the blood sugar level in the blood, insulin is released to increase the utilization of glucose by the lean tissues and through the storage of excess glucose. Insulin can be thought of as a key that unlocks the cells allowing glucose into the cells. Glucose is necessary for energy production so lean tissues like muscles, especially the heart muscles, use a lot of glucose. In the muscle and liver excess glucose is stored as glycogen. This storage is an important immediate source of energy in times of stress on the muscles, like physical activity.  If there is excess glucose left in the blood that hasn’t been used by the lean tissues or stored in the muscle or liver, insulin is also responsible for the storing the excess glucose as fat. The adipose tissues are very sensitive to insulin. Insulin has 6 effects the target cells that are dependent on the cell type of the target. These include acceleration of glucose uptake, accelerating glucose utilization, enhanced ATP production, stimulating glycogen formation, stimulating amino acid absorption and protein synthesis, and stimulating triglyceride formation in adipose tissue. Problems arise when insulin is unable to get sugar out of the bloodstream. See the clinical application for an explanation on how the body responses to high blood sugar.

Although high blood sugar can to problematic, low blood sugar can also impact our health. To prevent low blood sugar and to maintain homeostasis within the normal blood sugar range, glucagon is released by the alpha cells. A way to remember the stimulus for the release of glucagon is to break the word do into to an acronym. Glucagon is released when Glucose is All Gone. The primary function of glucagon is to increase blood sugar and to do that is has 3 key effects: to stimulate the breakdown of glycogen, stimulating the breakdown of triglycerides in adipose tissue, and stimulate the production and release of glucose by the liver. The process that glucagon stimulates to increase blood sugar levels is called gluconeogenesis. Gluconeogenesis is the process that happens in the liver to reform glucose from its storage form, especially when it is stored with amino acids.

Diabetes Mellitus commonly referred to as diabetes, sometimes referred to as the eye, nerve and kidney disease, is caused by the inability to lower the blood sugar levels. There are two types of Diabetes mellitus, type I and type 2.

Type 1, which used to be referred to as adolescent onset diabetes, is when beta cells don’t produce adequate amounts of insulin. Often this shows up in childhood or as a young adult and requires lifelong blood sugar management through insulin injections and dietary changes. Type 1 diabetes accounts for approximately 5% of cases. 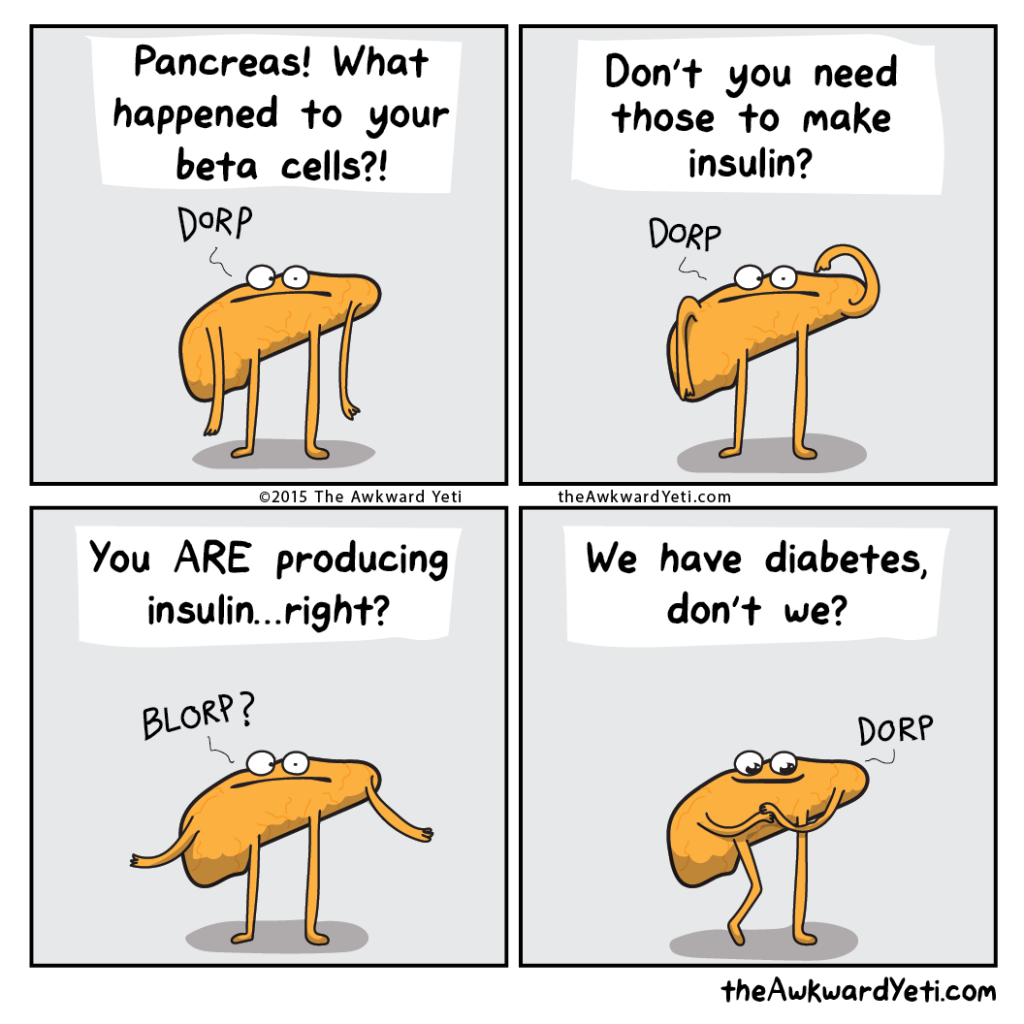 Picture of the islet of Langerhans https://upload.wikimedia.org/wikipedia/commons/0/05/Human_pancreatic_islet.jpg