The hip joint is a strong ball-and-socket joint that connects the head of the femur to the acetabulum of the coxal bone. This joint is known as a multi-axial joint meaning that it allows for flexion, extension, adduction, abduction, circumduction and internal/external rotation. The pelvis and hip joint together bear the full weight of the human body superior to these joints and in turn, requires strength and stability while standing and walking.

The acetabulum is identified as the “socket” portion of the hip joint. This concave space has a large articulating area in which the round head of the femur fits tightly, thus giving great stability and weight-bearing capabilities to this joint. Within the acetabulum, a fibrocartilaginous structure known as the acetabular labrum which projects like a horseshoe around the ridge of the acetabulum and helps in increasing the depth of the joint cavity. The overall capsule of the hip joint is extremely strong. It extends from the lateral and the inferior surface portions of the pelvic girdle until both the intertrochanteric line and intertrochanteric crest of the femur. This encasement of the capsule helps in preventing the femur from separating too far from the acetabulum.

Working with the surrounding muscles, much of the stabilization of this joint when standing, walking and running comes from these ligaments. 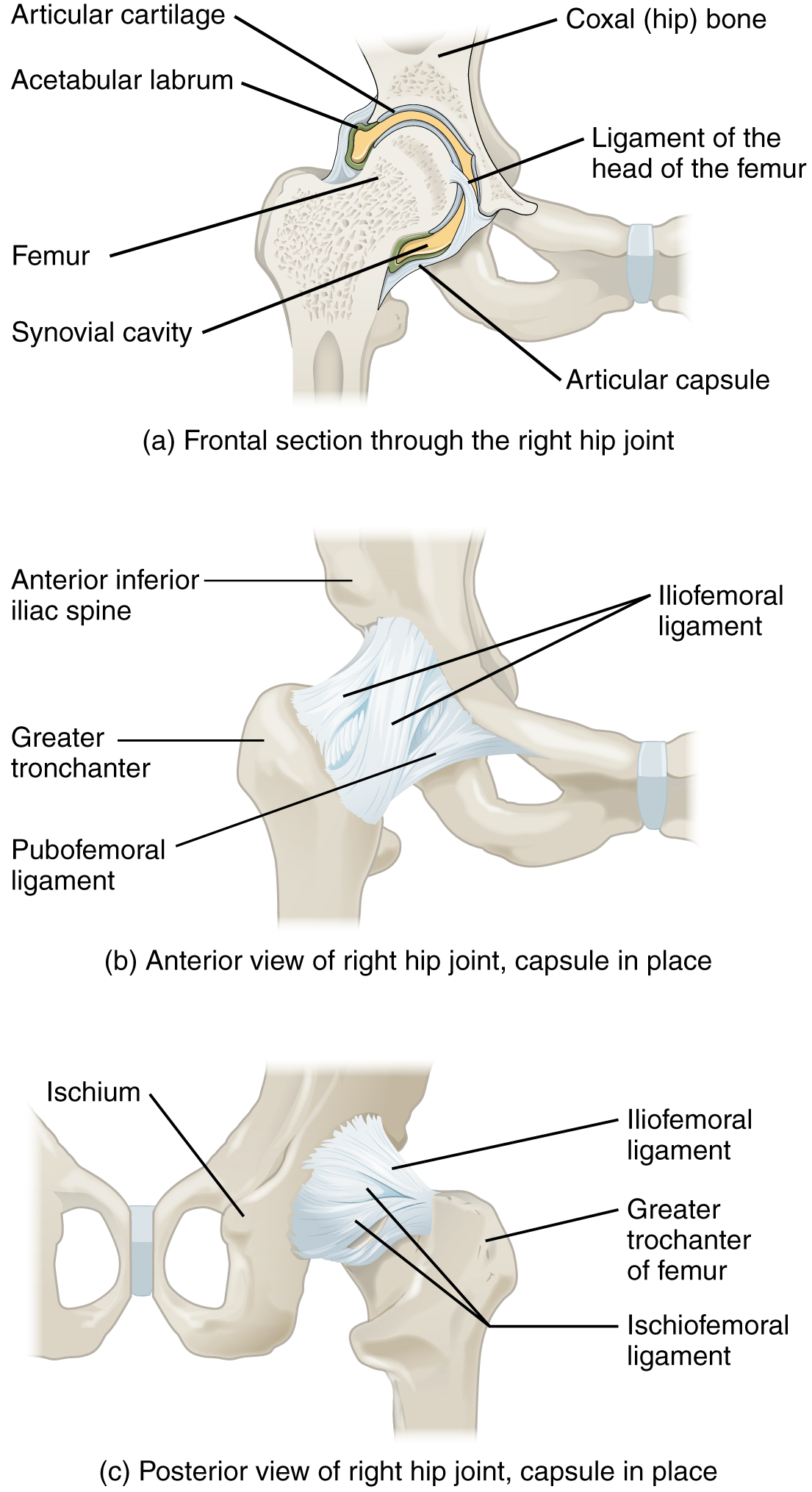 Figure 1. Diagrams demonstrating the hip joint. (a) Represents the ball-and-socket joint of the hips and is multiaxial joint that provides both stability and a wide range of motion. (b-c) When standing, the supporting ligaments are right, pulling the head of the femur into the acetabulum.

Ligaments of the Pelvis

There are several ligaments that connect the bones of the pelvis together. The sacroiliac joint is supported by two very strong ligaments that attach the ilium of the coxal bone to the sacrum. These are called the anterior sacroiliac ligament which is on the anterior portion of this joint, and the posterior sacroiliac joint which is located on the posterior portion of the joint. Along with this, there are two additional ligaments that span the sacrum and the coxal bone. They are the sacrospinous ligament, which runs from the sacrum to the ischial spine, and the sacrotuberous ligament, which runs from the sacrum and connects at the ischial tuberosity. These two ligaments work to keep the sacrum immobile as it is carrying the weight of the body. 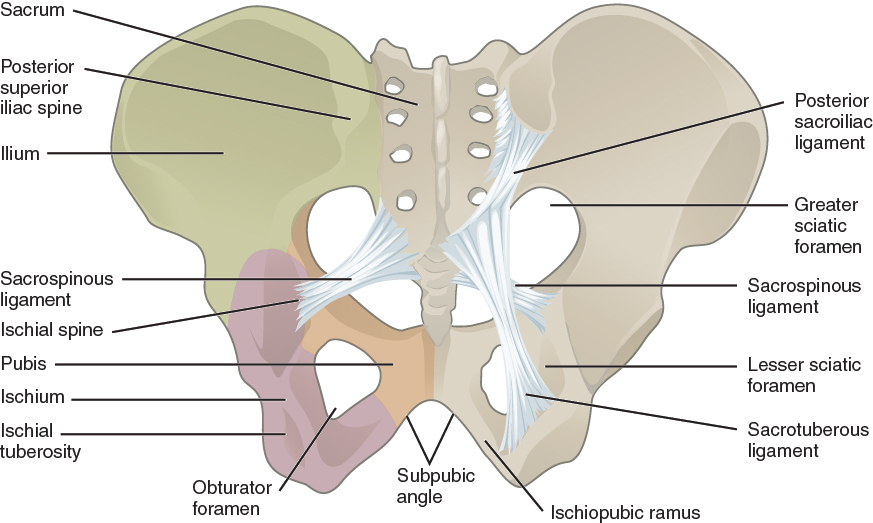 Figure 2. Comparison of the male and female pelvis. The female pelvis (above) shows the adaptation for the means of childbirth and is broader, with a larger subpubic angle, a rounder pelvis brim, and a wider and more shallow pelvic cavity then the male pelvis.

The two primary ligaments of the gluteal region are the sacrotuberous ligament and the sacrospinous ligament.

The large sacrotuberous ligament (STL) is continuous from the posterior sacro-iliac ligament and spans the length of the posterior superior iliac spine,the lateral portion of the sacrum, the upper coccyx and connects to the ischial tuberosity of the ischium. The most inferior and superficial fibers of this ligament are continuous with the tendon of the biceps femoris muscle.

Connective Tissue of the Pelvic Floor

The pelvic fascia is broken into two divisions, the parietal and visceral divisions. The parietal fascia is part of the lining of the abdominal and pelvic walls. It makes up part of the pelvic floor as the superior and inferior fasciae of the pelvic diaphragm. It also lines the lateral pelvic wall as the obturator fascia. The obturator fascia lines the obturator internus and the lateral wall of the ischiorectal fossa. A fascia tunnel in this wall, the pudendal canal, houses the pudendal nerve and vessels. 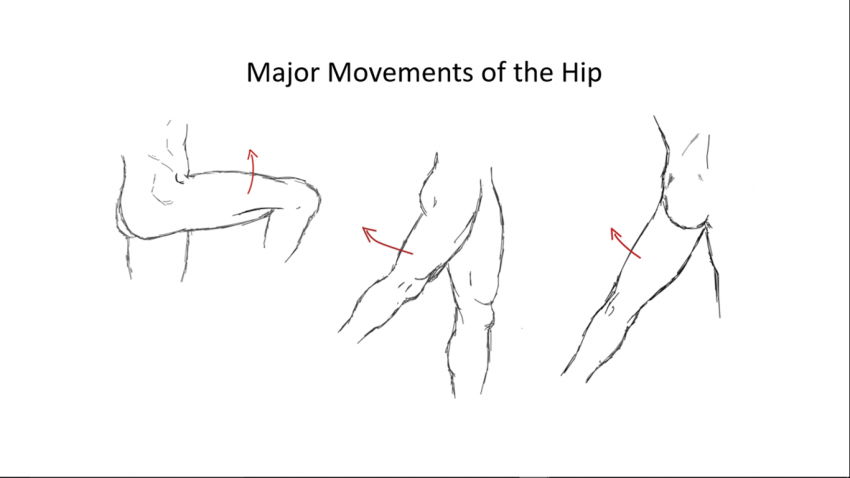 Figure 4. Diagram demonstrating the major movements of the hip and thigh seen above; extension on the left, flexion in the middle and abduction on the right. 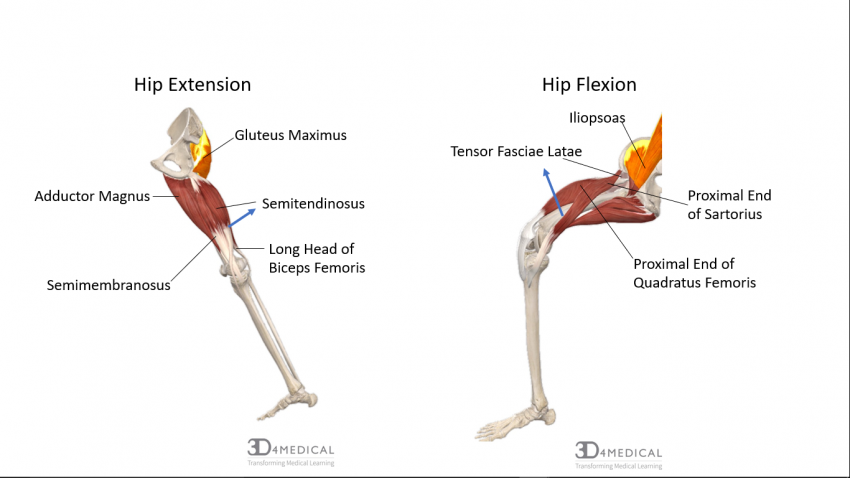 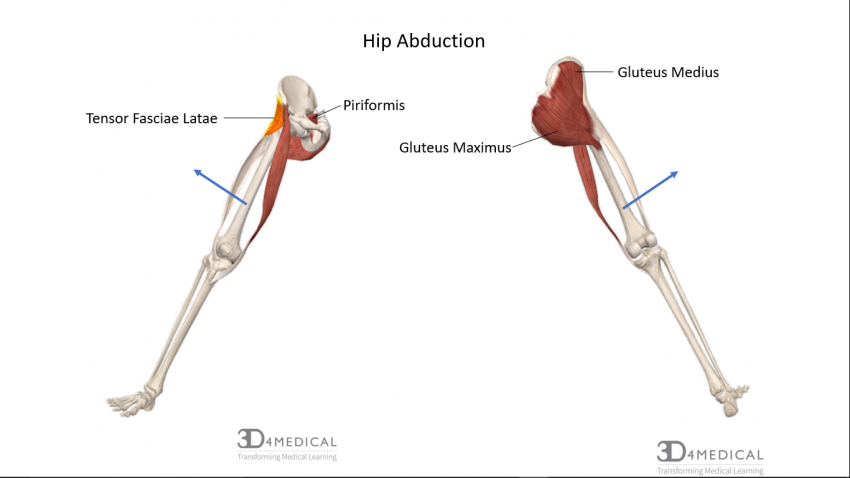