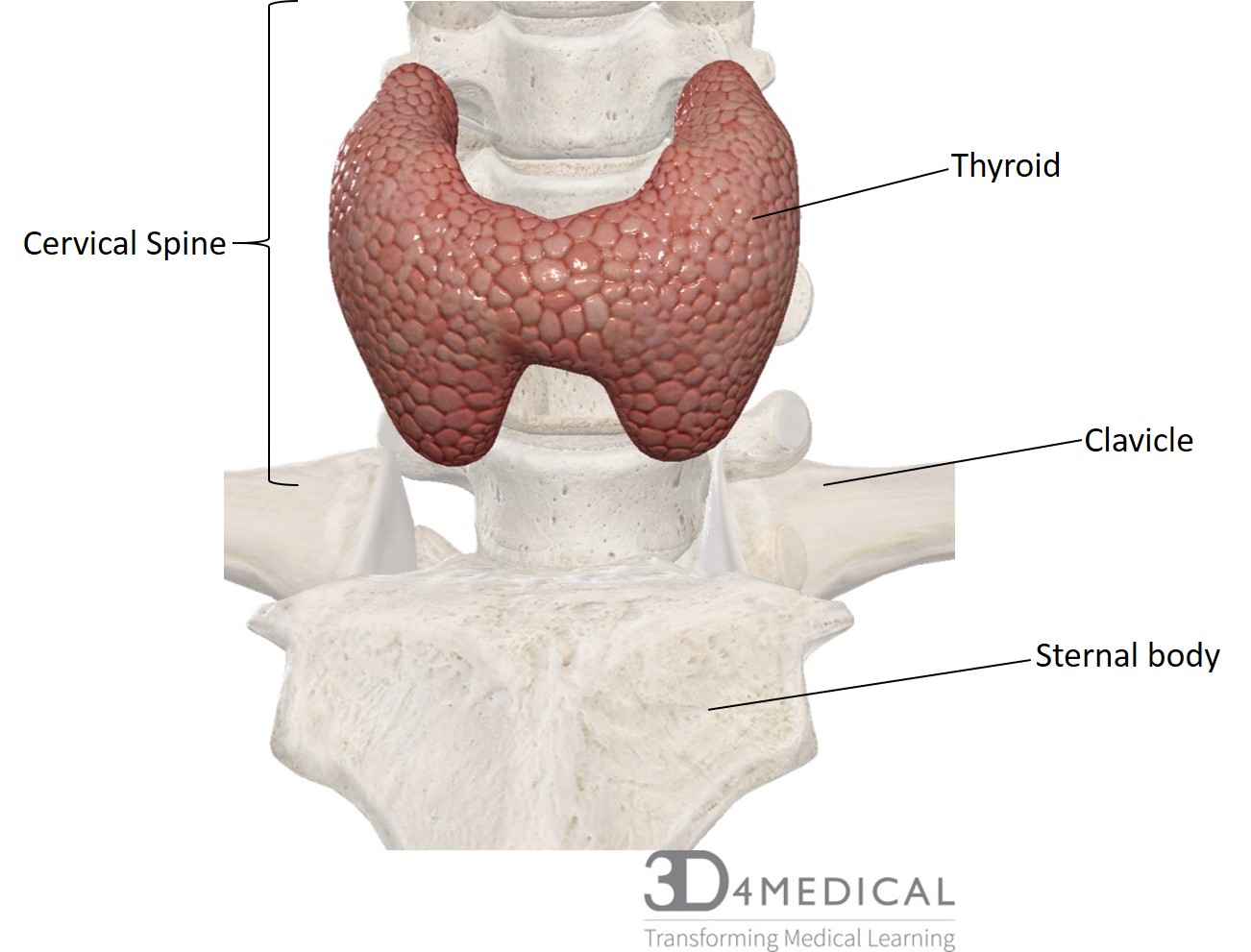 The thyroid is an endocrine organ that is located just anterior and caudal to the larynx and cephalic to the sternum. Its curved butterfly shape wraps around the trachea. The thyroid is superficial enough that you can locate your thyroid with your fingers, and noticeable changes can be seen if you experience problems like hypothyroidism.

The thyroid is made up of two lobes that are connected by the isthmus, which is a thin band of connective tissue. The thyroid gland contains an abundance of thyroid follicle, they are spheres that are lined by simple cuboidal epithelium cells. The thyroid follicles contain a viscous colloid that has a high concentration of dissolved proteins. They are important for the formation of thyroglobulin, which are globular proteins that are synthesized by the follicle cells. The amino acid base of this thyroglobulin proteins is tyrosine. Thyroglobulin are the building blocks for the thyroid hormones.

The thyroid has a secondary function which is the regulation of calcium in the blood. This is done by calcitonin (CT) hormone produced by the thyroid’s clear cells or parafollicular cell. Commonly these cells are referred to as the C cells and are found just outside the follicle.  Calcitonin works with the Parathyroid hormones to regulate calcium in the blood through the opposite actions of osteoclasts and stimulation of the calcium excretion from the kidneys. 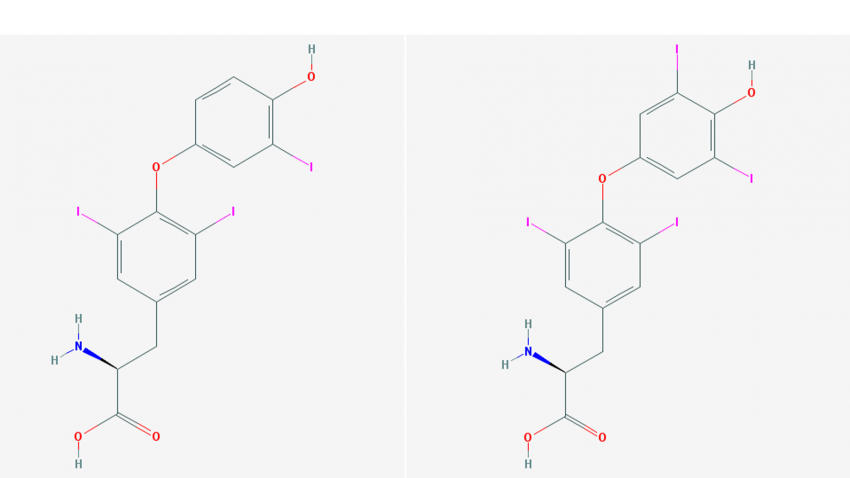 Step 2 is where the iodine ion turns into Iodine atoms. This happens when the iodide ions diffuse to the apical surface of the follicle cells and the ion loses its electron. The enzyme thyroid peroxidase removes the electron that changes the charge of the ion to an atom. As part of this reaction sequence at the apical surface one or two of the new iodine atoms are attached to the tyrosine portion of a thyroglobulin molecule within the follicle cavity.

Step 4 is when the thyroglobulin is removed from the follicles by the follicle cells through endocytosis.

Step 5 is when the thyroglobulin is then broken down by Lysosomal enzymes, which allows the amino acids and newly produced thyroid hormones to enter the cytoplasm of the follicle cell. Leftover amino acid are then recycled to reform new thyroglobulin.

The limiting factor that controls that rate of hormone production is the release of TSH. TSH which stimulate the active transport of iodide ion into the cell and the formation thyroglobulin is released from the pituitary gland. When the TSH has a low concentration in the blood there is less stimulation of the thyroid gland. As a result, this limits how much iodide ions are transported into the follicle cells and can stimulate the formation of the thyroglobulin.

The size of the thyroid is based on heredity, environmental and nutritional factors. The normal size of the thyroid gland is about 34g or 1.2 oz. This hormonal imbalance can cause the thyroid to enlarge, and if severer enough the enlargement can distort the anterior surface of the neck. This distortion is called a goiter, which is a noticeable bulge of the anterior surface of the neck. There are two hormonal imbalances that cause goiters which are hyperthyroidism and hypothyroidism.

Hyperthyroidism is when the thyroid is overreacting to stimulus from the pituitary via the Thyroid-stimulating Hormone (THS) and/or it is overproducing T3 and T4. This can be due to an autoimmune disease like Grave’s Disease, tumor, goiter or the pituitary gland secreting too much TSH. Blood tests are done to confirm if there are high levels of T4, T3 or TSH in the blood. Symptoms include low body weight with the inability to gain weight, restlessness, excess sweating, anxiety, and rapid pulse.  In severe forms of Grave’s disease, it can cause the bulging of the eyes.  Medication can be used to suppress that overproduction of the hormones.

Hypothyroidism is when the thyroid is under-responding to the stimulus of THS and/or doesn’t release enough T3 and T4. This can also cause a goiter, but other symptoms are very different to those seen in hyperthyroidism.  Other symptoms of hypothyroidism a slow metabolism, mental dullness, physical slowness, dry skin and hair, lower body temperature, depression, muscle weakness, cramps, and orange coloration of skin especially on the palms. Hypothyroidism can also be caused by a lack of iodine in the diet which can limit the formation of the thyroid hormone in the follicle cells. This is rare in today’s food as iodized salt is normally what you find in your salt shaker.

Summary of the Graves eye disease by the American thyroid association https://www.thyroid.org/graves-eye-disease/

Summary of the goiter by the American thyroid association https://www.thyroid.org/goiter/ 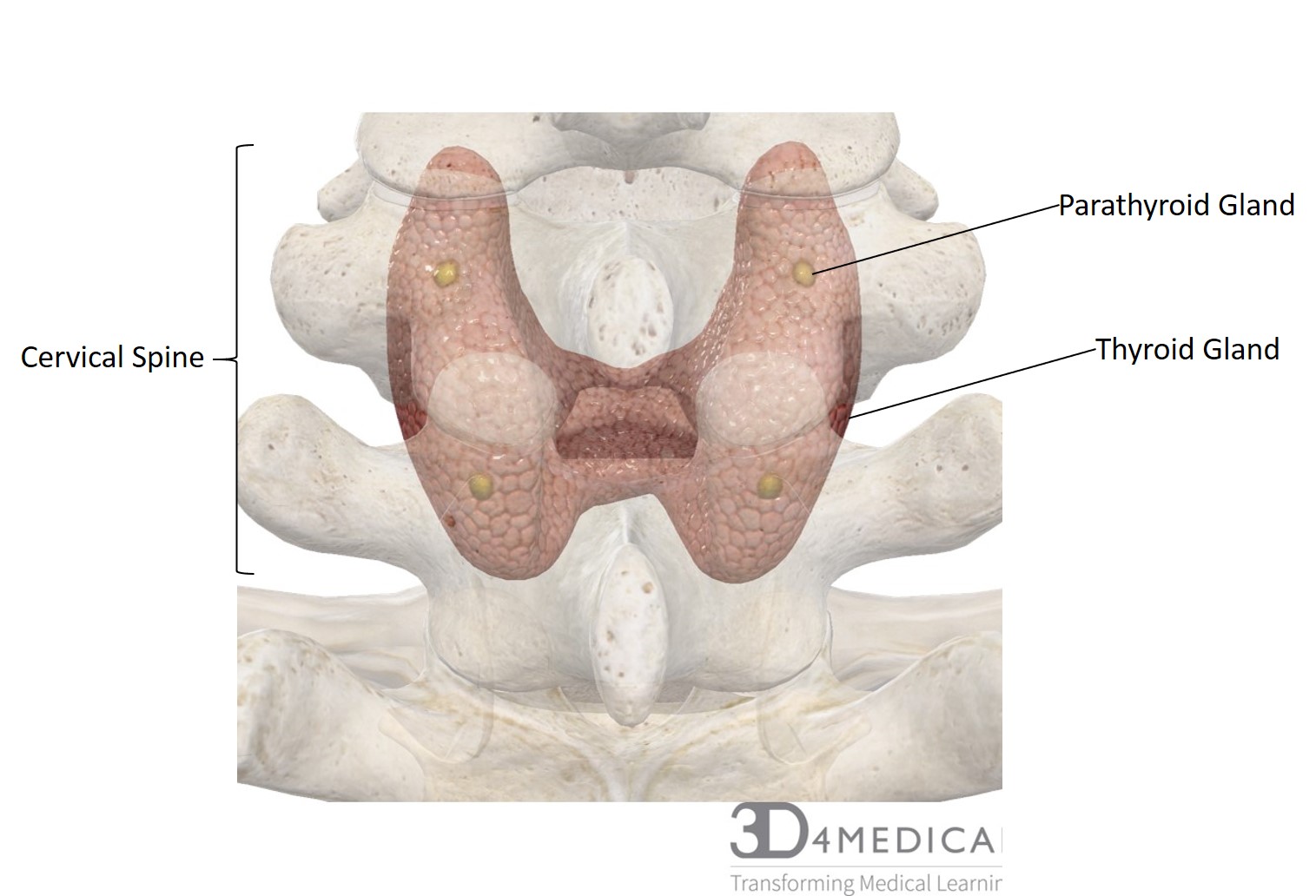 The parathyroid hormone (PTH) works together with the thyroid hormone calcitonin (CT) to regulate the calcium concentration in body fluids.  However, unlike calcitonin that causes that high calcium levels to drop by increasing excretion by the kidneys and depositing calcium in the bones, PTH have three effects that increase the blood calcium levels.

The second effect is that the kidneys increase the reabsorption of calcium. This decreases the amount of calcium that is lost their urine.

The third effect of PTH is that it stimulates the formation and secretion of calcitriol. Calcitriol complements the functions of PTH by enhancing the mineral absorption from the digestive tract. This includes an increase in Calcium and Phosphate (PO43-).

This graph shows how calcitonin from the thyroid and PTH from the parathyroid balance the calcium in the blood. 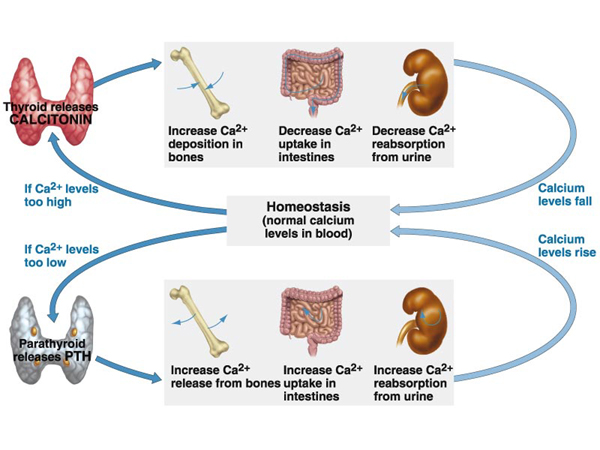 Like the thyroid hormones, when the parathyroid hormone is either too high or too low problems arise. More common dysfunction is when the parathyroid hormones are too high, this condition is known as hyperparathyroidism or hypercalcaemia. This causes an increase in blood calcium levels that might not be balanced by the calcitonin produced by the thyroid. In mild cases, symptoms are not noticeable, but it more severe cases the high levels of calcium cannot be regulated. Symptoms of severe hyperparathyroidism include digestive upset, constipation, depression, lethargy, weakness, joint pain, and excessive thirst. Symptoms like the weakness, nausea, tiredness, and decreased muscle tone are due to the abundance of calcium-blocking depolarization on nerves. The buildup of calcium in body tissues can also cause bone spurs, deposits in blood vessels, lungs and gastric mucosa. If deposits form in the kidney this can cause kidney stones that carry the risk of damaging the kidney’s delicate filtering system. Usually, hyperparathyroidism is due to a parathyroid adenoma or tumor.

The other extreme where too little PTH is formed is called hypoparathyroidism. This is a far rarer condition, which causes blood calcium levels to become very low. When calcium levels are too low the sodium gates on the muscles can be opened, as calcium is needed to keep them closed. This increase in sodium in the muscle can cause muscles spasms. This can also affect the neural tissue by depolarizing and causing hyperexcitability. Although it is rare treatments involving Vitamin D and calcium supplementation make it easy to treat.