The pectoral girdle or shoulder girdle is formed by the clavicles, scapulae, and the proximal end of the humerus. This boney structure is surrounded by large muscles that support the girdle. Many of the features of the bones and musculature discussed in earlier sections are palpable, and the media provided will give you a walk through guide. We want to be able to palpate these structures in anatomy because much like looking at a diagram or image, this gives us a point of reference; this makes it easier to learn the anatomy of the region. This allows students to be more aware and involved in their studies, but also it is a tool commonly used by practitioners when working with their patients. So with the permission of a partner walk yourself through some of the steps provided by specialists in the videos, and explore the palpable features of the pectoral girdle. Perhaps when you’ve gotten enough practice with the guides, attempt a walk through on your own and see how many features you can locate.

Were you able to palpate some of the following features?

The superficial muscles of the posterior pectoral girdle that can be identified are,  Levator Scapulae, Serratus Anterior, Latissmus Dorsi, and Deltoid 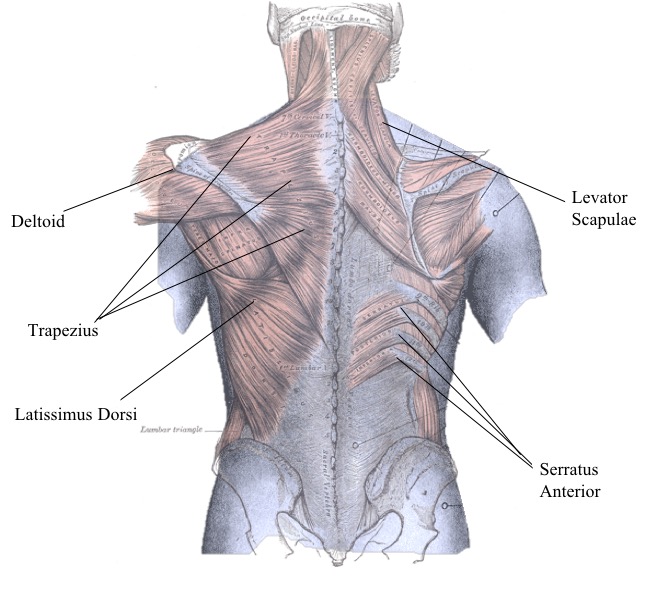 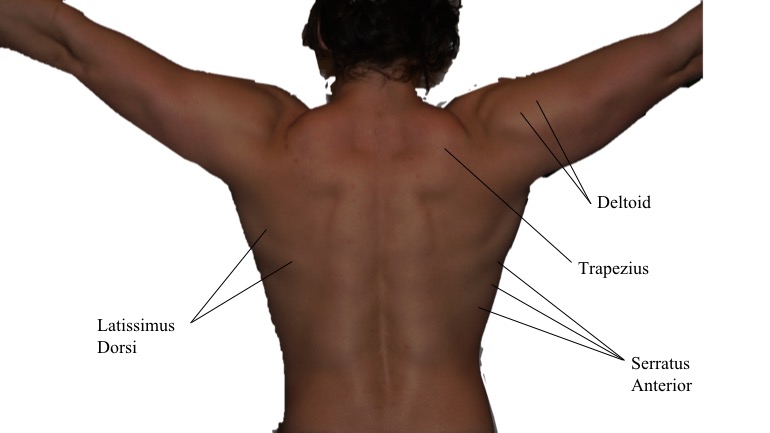 The superficial muscles of the anterior pectoral girdle  that are easily identifiable are the Deltoid and pectoralis major: 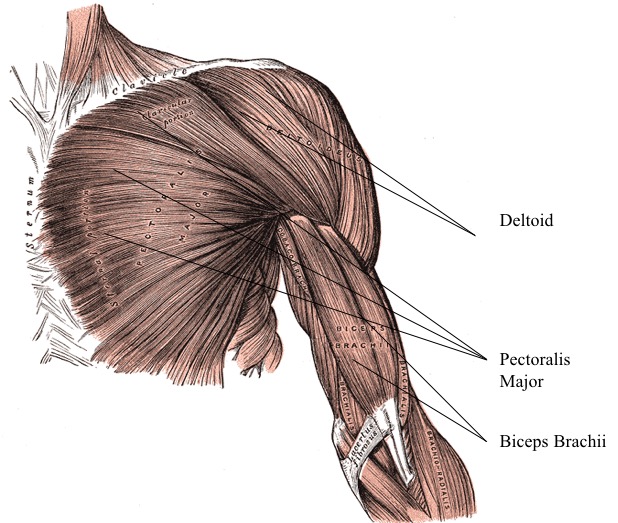 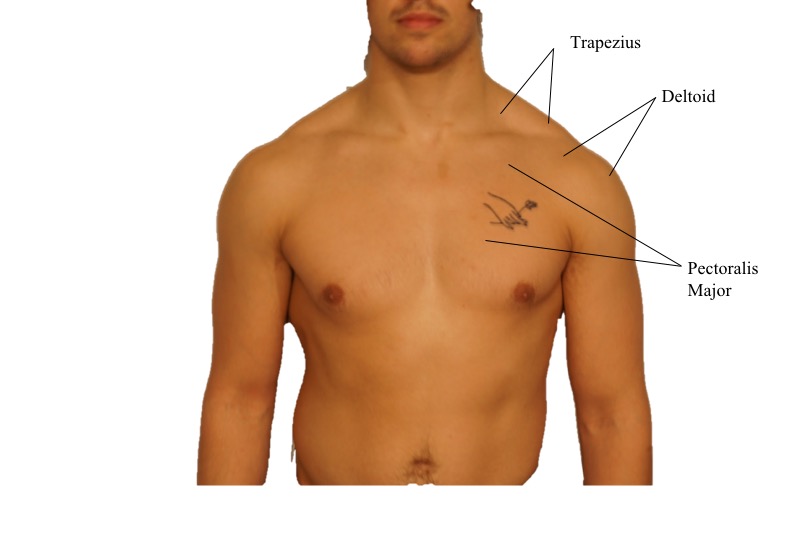 Muscles of The Upper Arm

Identifying muscle’s on yourself

Biceps Brachii: These muscles are best seen when the arm is in a supine position with the elbow in flexion. You can feel the biceps brachii tendon at the distal end of the humerus, inserting into the cubital fossa on the proximal end of the forearm.

Triceps Brachii: These muscles can be felt when the arm is extended, more so against resistance. 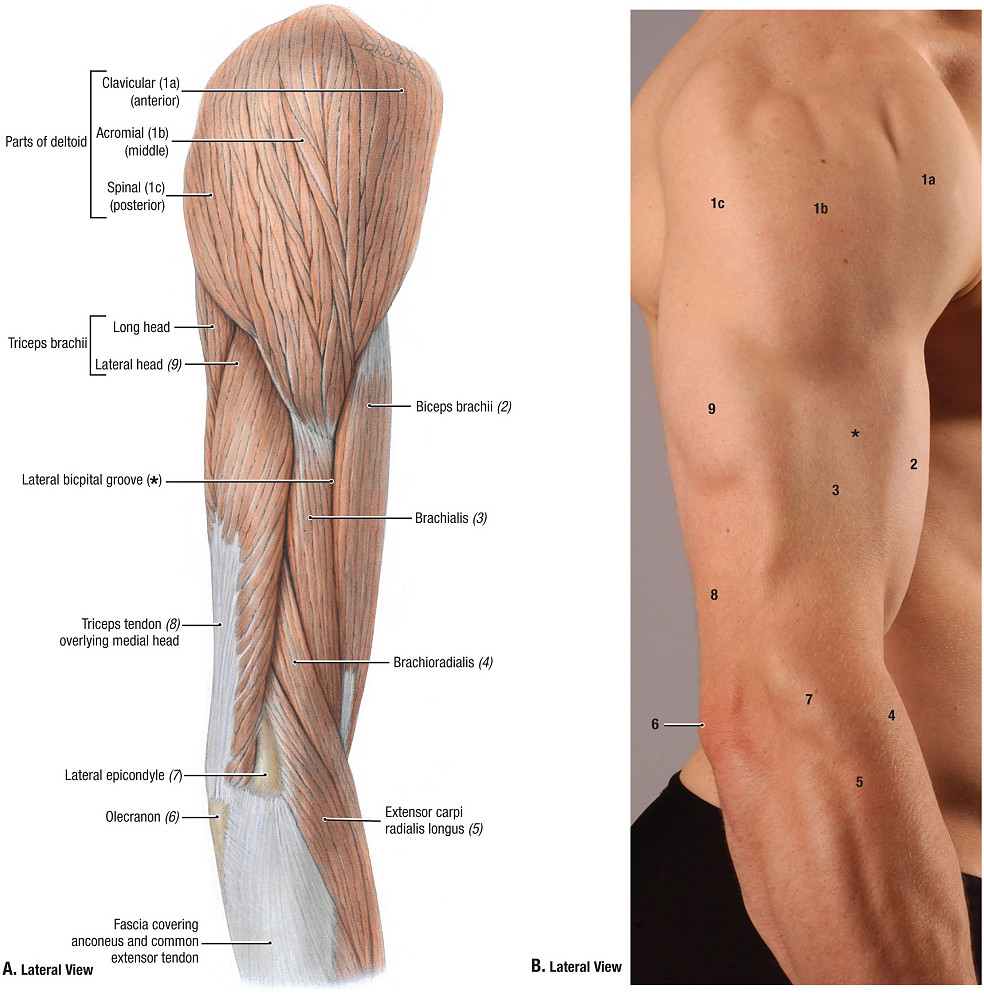 Surface Anatomy of the Forearm and Wrist

The antebrachium, or rather the forearm, is the region between the elbow and wrist; and, the carpus, or wrist, is between the forearm and palm. By now you’re probably reminded of Stealers Wheel hit song “Stuck in the Middle with You,” and I apologize for it being stuck in your head, or a sudden urge to watch Quentin Tarantino’s Reservoir Dogs (1992). Moving forward, the following are some highlights of the prominent surface anatomy of the forearm and wrist.

Isolating the muscles of the forearm is no simple task, but it is simpler to examine the tendons as they approach the wrist and then to move proximally to unveil the musculature:

The radial artery is located on the lateral aspect of the wrist between the styloid process of the radius and flexor carpi radialis tendon. This area is commonly used to take one’s pulse; this can be either by supporting the wrist with your palm on the dorsal surface and wrapping your fingers around just beneath the crook of the thumb or just by pressing this surface with the index and middle fingers.

This is an area that is aptly named by its historical significance of individuals with the habit of taking a pinch of snuff (scented powder or powdered tobacco), placing this substance into this area, and then subsequently sniffing it into the nose. The area is a triangular depression between the tendons extensor pollicis longus and brevis. Other features to be palpated in this area include the styloid process of the radius, scaphoid, trapezium, first metacarpal, and radial artery.

If you regard the anterior surface of the wrist, there are a series of creases or more-or-less constant lines. Each are aptly named as proximal, middle and distal, and are also attached firmly to the underlying fascia.

Surface Features of the Hand