Nerves, Blood Vessels and Lymph of the Gluteal Region

Nerves of the Gluteal Region

Originating from the sacral plexus (L4 – S4), there are a number of significant nerves that either directly innervated the buttocks or pass through the gluteal region to innervate more inferior regions such as the perineum and thigh.

These nerves can be categorized into the superficial (clunial nerves) that provide sensation to the skin of the gluteal region, and the seven deep gluteal nerves (superior gluteal nerve, inferior gluteal nerve, sciatic nerve, nerve to quadratus femoris, posterior cutaneous nerve of the thigh, nerve to obturator internus, and the pudendal nerve) that either directly innervate gluteal structures or continue their course inferiorly to other regions. 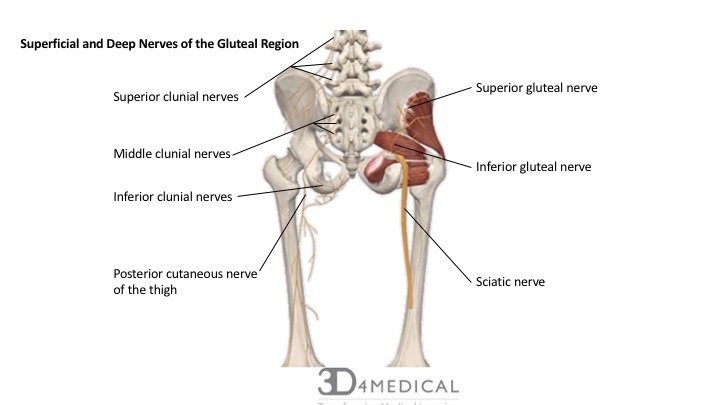 The most superficial nerves of the gluteal region are the inferior, middle and superior clunial nerves. They provide sensation within the borders of the iliac crest, between the posterior superior iliac spine and the iliac tubercles.

The superior clunial nerve originates from the posterior rami L1 – L3 spinal nerves of the lumbosacral plexus, spans inferolaterally across the iliac crest and supplies the skin of the superior buttocks.

The middle clunial nerves originates from the posterior rami of S1 -S3 spinal nerves of the sacral plexus, travels through the sacral formina and spreads laterally surface to supply the skin of the sacrum and skin close to the intergluteal cleft of the buttocks.

The inferior clunial nerve originates from the posterior rami of S2 – S3 spinal nerves of the sacral plexus, exiting at the inferior border of the gluteus maximus muscle before travelling in a superior direction to supply the inferior half of the buttocks to the level of the greater trochanter.

The seven deep gluteal nerves all originate via the lumbosacral plexus or sacral plexus, all exit the pelvic region through the greater sciatic foramen and with the exception of the superior gluteal nerve, all travel through the infrapiriform foramen (inferior to the piriformis) to innervate gluteal regions or other inferior structures. 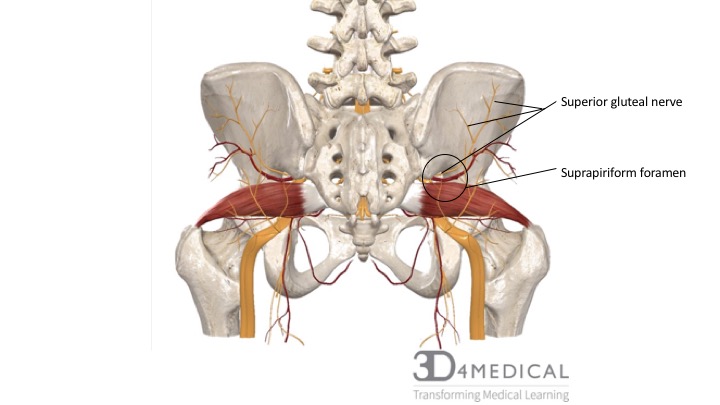 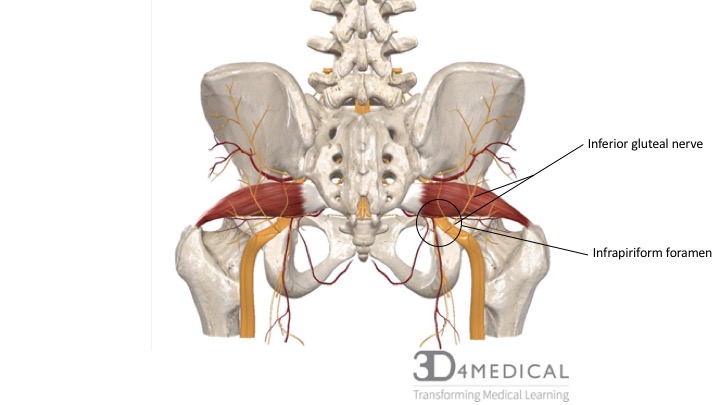 Although the sciatic nerve does not supply any of the gluteal musculature, because of its relationship to the piriformis and individual variability in its course, it is an important structure implicated in the clinical condition known as piriformis syndrome (see Pelvic Clinical Conditions).

Posterior Cutaneous Nerve of the Thigh

Blood Vessels of the Gluteal Region

Arteries of the Gluteal Region

The inferior gluteal artery also originating via the internal iliac arteries, descends through the infrapiriform foramen travelling deep the gluteus maximus and medial to the sciatic nerve. This artery is responsible for supplying the gluteus maximus, obturator internus, quadratus femoris, and proximal fibers of the hamstrings.

Veins of the Gluteal Region

The superior and inferior gluteal veins arise from the internal iliac veins and parallel the course of the superior gluteal artery and inferior gluteal artery through the suprapiriform foramen and the infrapiriform foramen to drain blood from the gluteal region. As a safety mechanism the gluteal veins connect with femoral vein tributaries to provide an alternate path for blood return if the femoral vein becomes occluded.

Nerve Innervation of the Pelvic Floor

The pelvic floor muscles are innervated through somatic, visceral, and central pathways. The pudendal nerves pass through the pudendal canal. The main nerve that innervates the pelvic floor is the pudendal nerve that arises from the ventral branches S2-S4 of the sacral plexus. The pudendal canal is located through the lateral wall of the ischiorectal fossa. The nerves and vessels are surrounded by a fascia sheath. The pudendal nerve is derived from the second, third, and fourth sacral spinal nerves. The nerve exits the pelvis through to the gluteal region between piriformis and coccygeus through the greater sciatic foramen and crossing through the sacrospinous ligament close to the attachment spot to the ischial spine. It then divides into the dorsal and perineal nerve of the penis or clitoris. 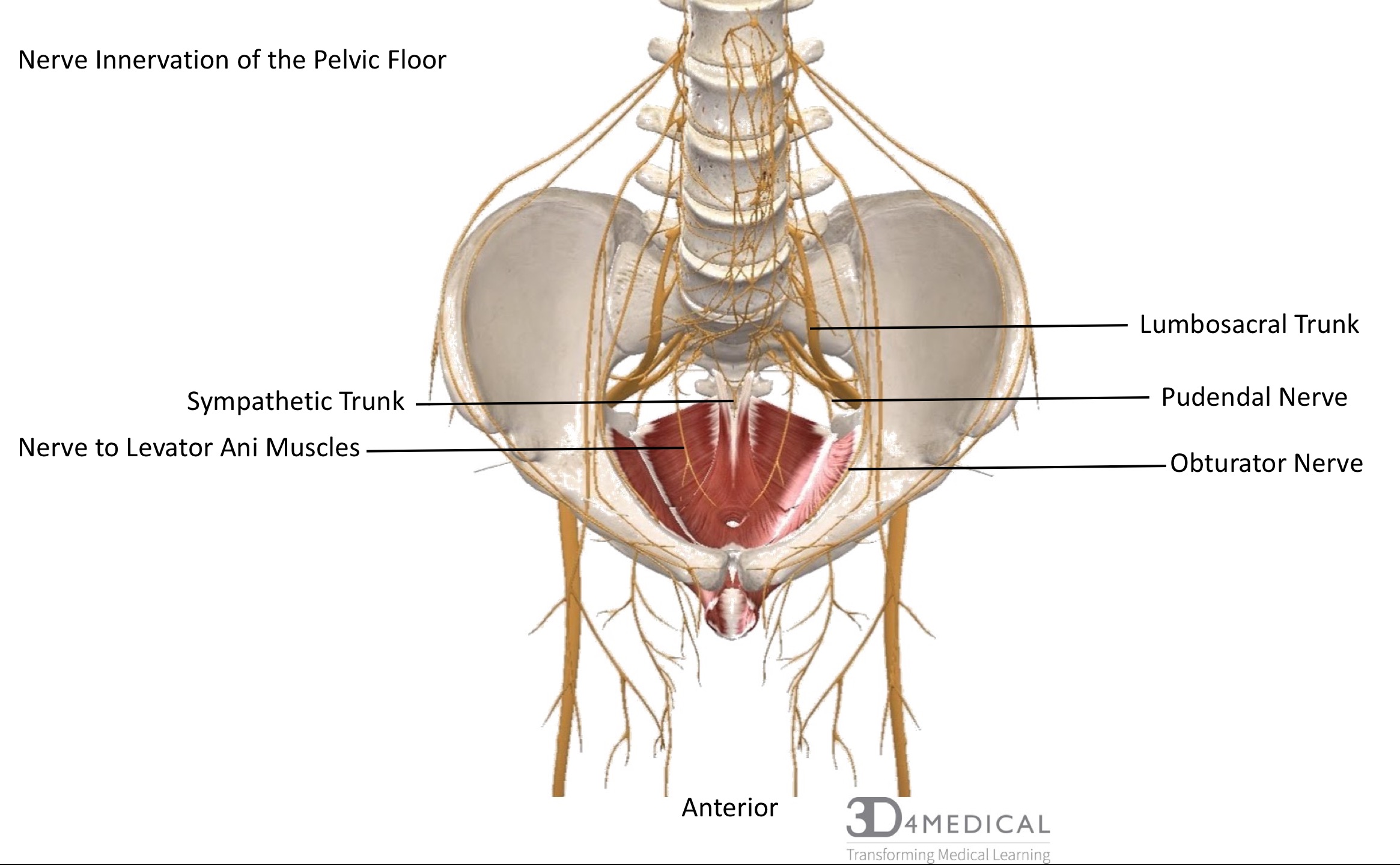 Blood Supply of the Pelvic Floor:

Arteries of the Pelvic Floor

Veins of the Pelvic Floor 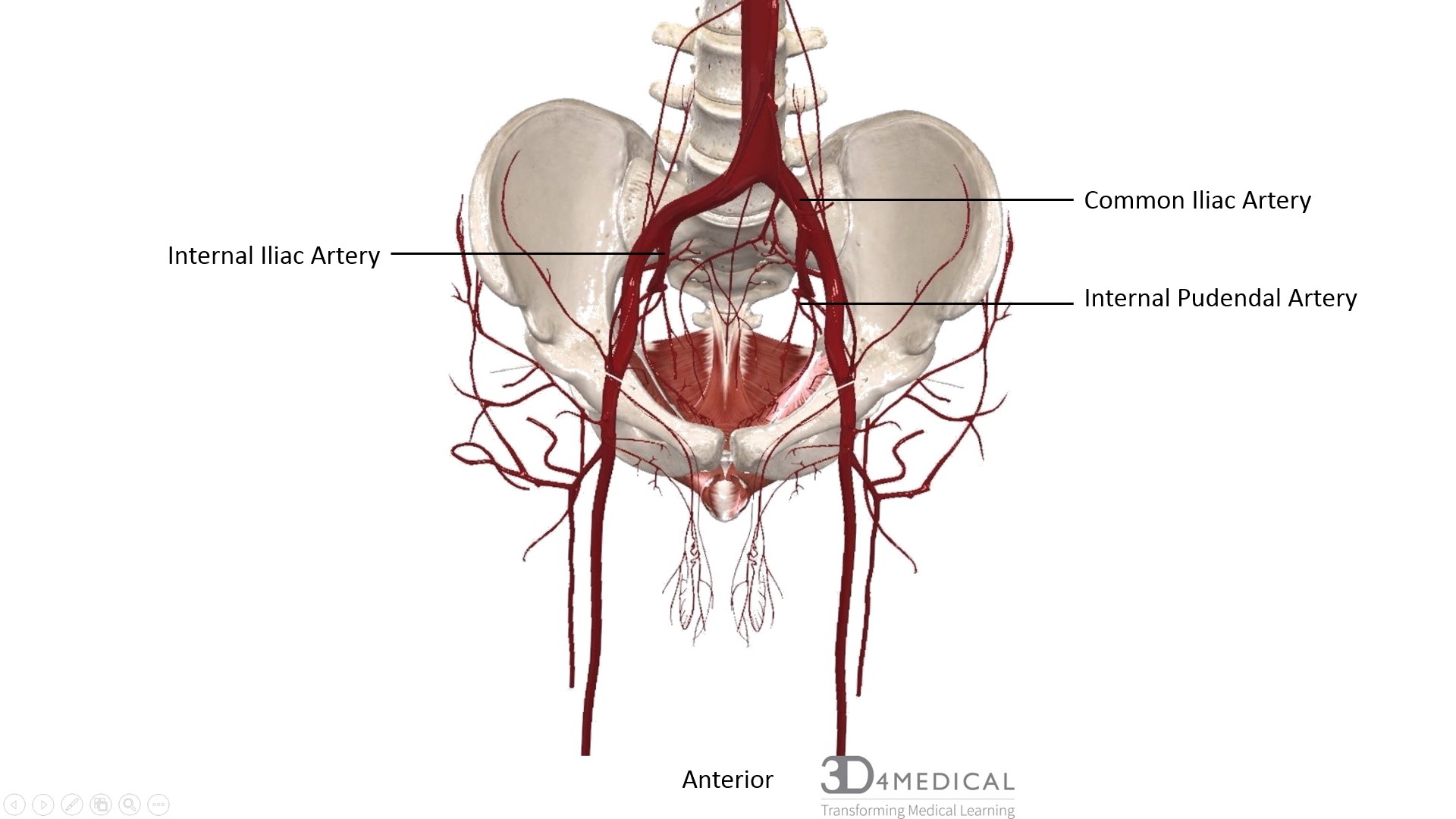