Blood to the Brain

A lack of blood supply to the brain can be detrimental to its functions. Cerebral hypoxia, the lack of oxygen to the brain, can deprive the brain of oxygen and nutrients which can cause it to not function properly. The brain, however, has a system that supplies blood via a network of arteries; therefore, if something were to happen to cut off oxygen and nutrients to a specific artery such as a clot, blood would still flow to other areas of the brain via other arteries.

There are twelve pairs of cranial nerves connected to the brain. Cranial nerves are classified based on function. There are four categories: sensory, special sensory, motor, and mixed nerves.

Sensory nerves carry somatic sensory information, such as touch, temperature, pressure, vibrations, and pain. Special sensory nerves carry information like sight, smell, hearing, and balance. Nerves like the olfactory nerve, optic nerve, and vestibulocochlear nerve are special sensory nerves. Motor nerves are axons of somatic motor neurons. This includes nerves like the oculomotor, trochlear, abducens, accessory, and the hypoglossal nerves. Mixed nerves include a mixture of sensory and motor nerves such as the trigeminal, facial, glossopharyngeal, and the vagus nerve.

This is where the face will be discussed…

Nerves of the posterior cervical region are primarily branches from the cervical spine nerve rami including the cervical plexus (a branching network of nerves) and some of the roots for the brachial plexus. The nerves in this region innervate muscles in the region as well as the cutaneous parts of the neck and scalp. The eleventh cranial nerve, the Accessory Nerve (CN XI), is also important to this region as a motor nerve to the trapezius muscle and sternocleidomastoid. 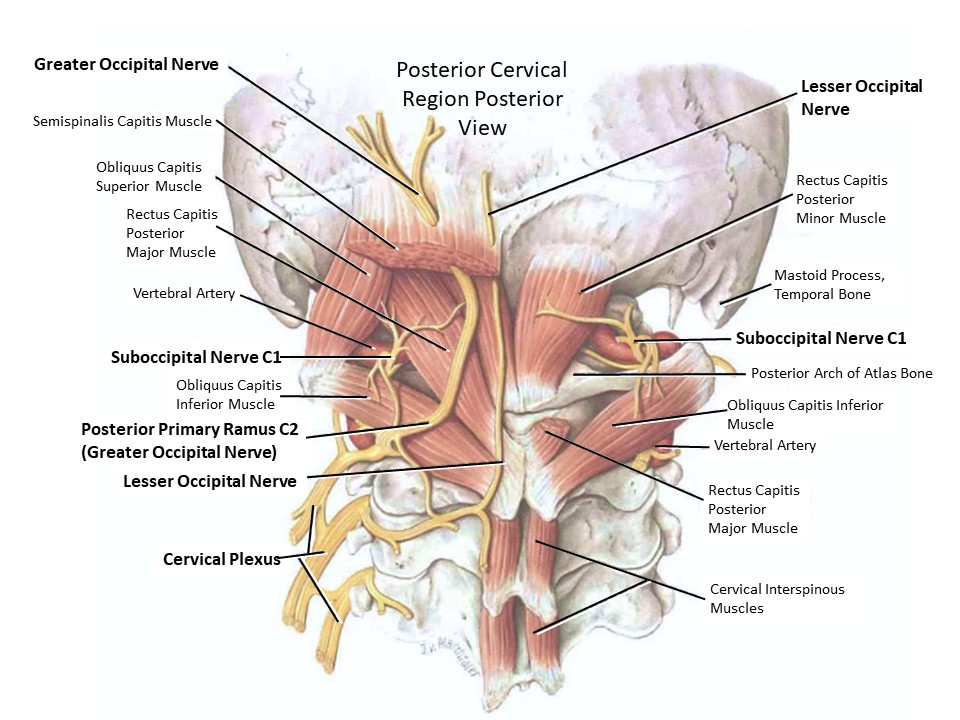 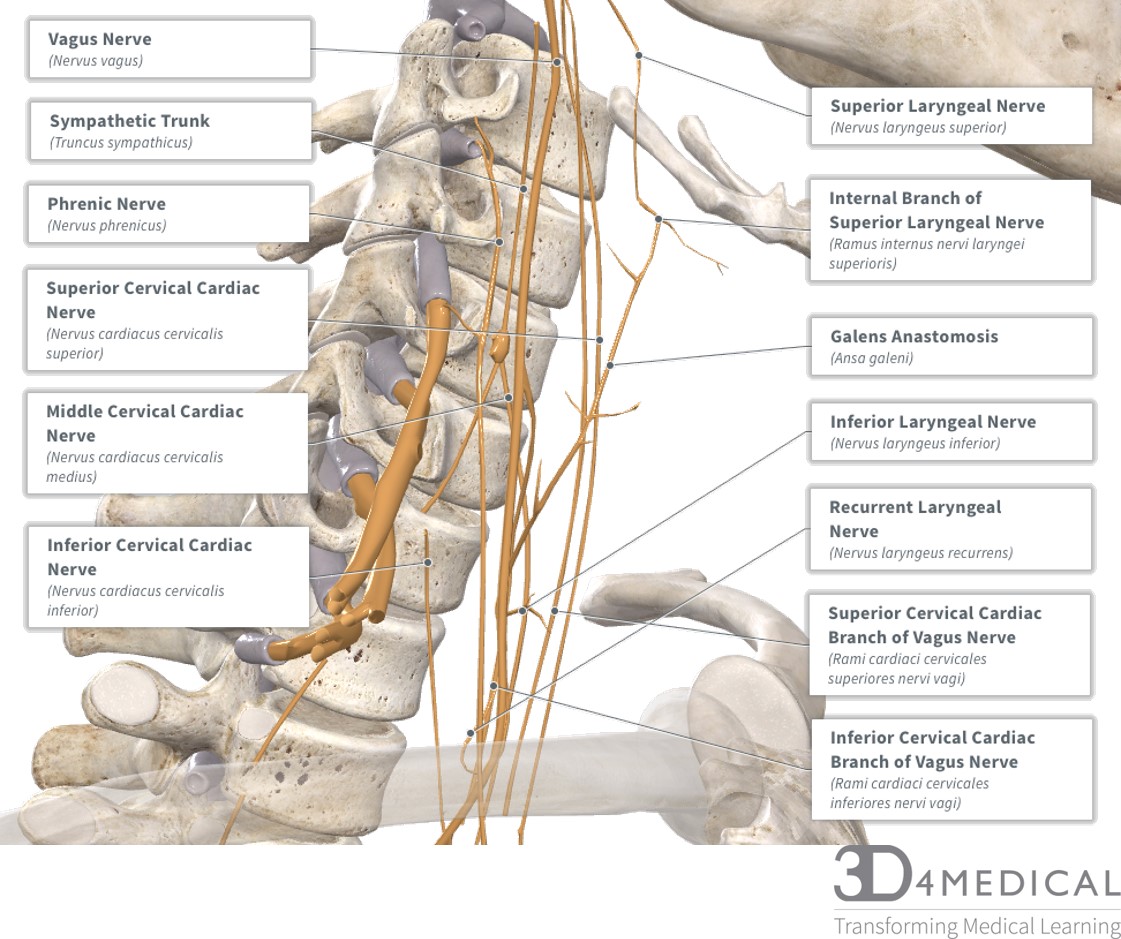 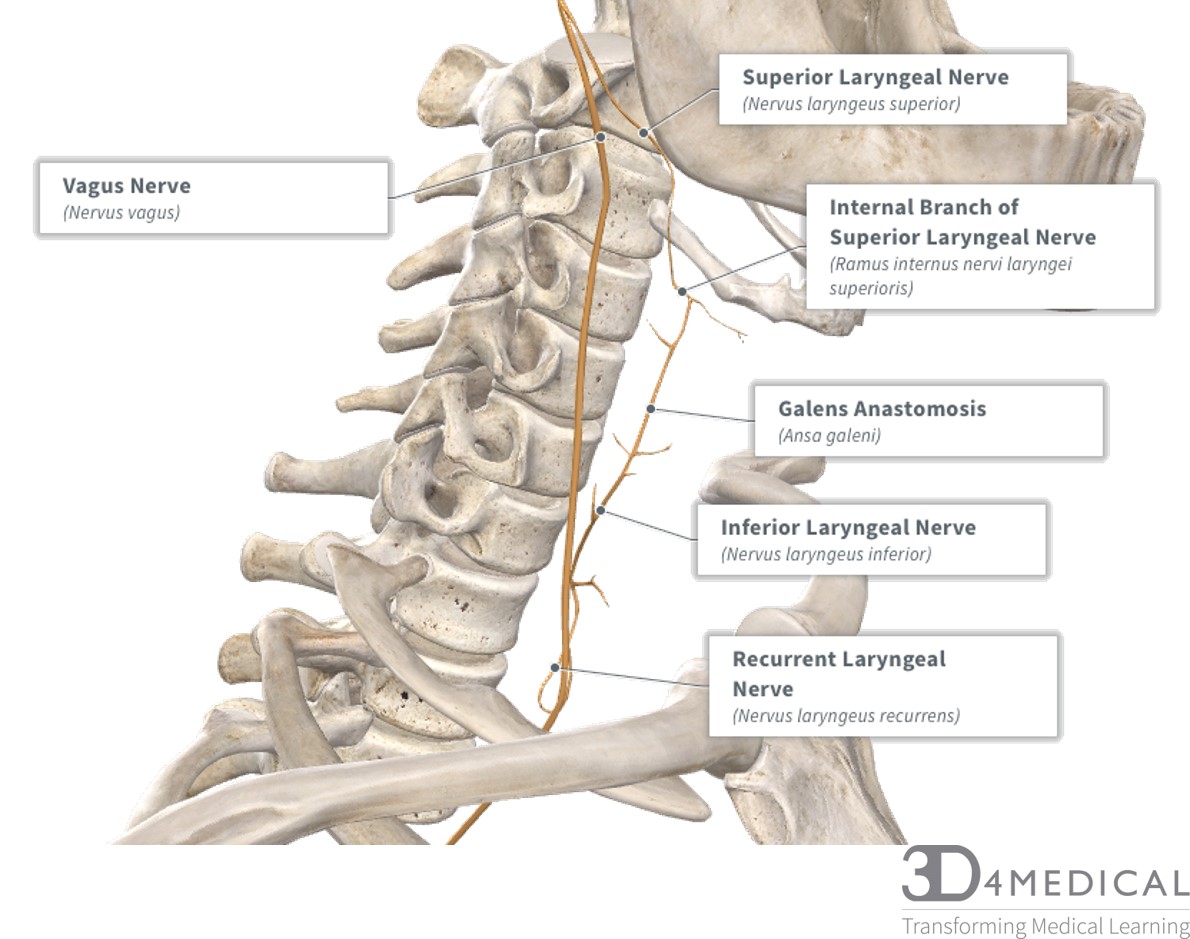 Common Carotid Arteries: The right common carotid arises from the brachiocephalic artery (brachio, BRĀ-key-ō, upper limb / cephalic, SĔF-ă-lik, pertaining to the head) while the left carotid artery branches directly from the aortic arch. Both bifurcate (split) into the internal and external arteries that supply blood to the face, skull, and brain. 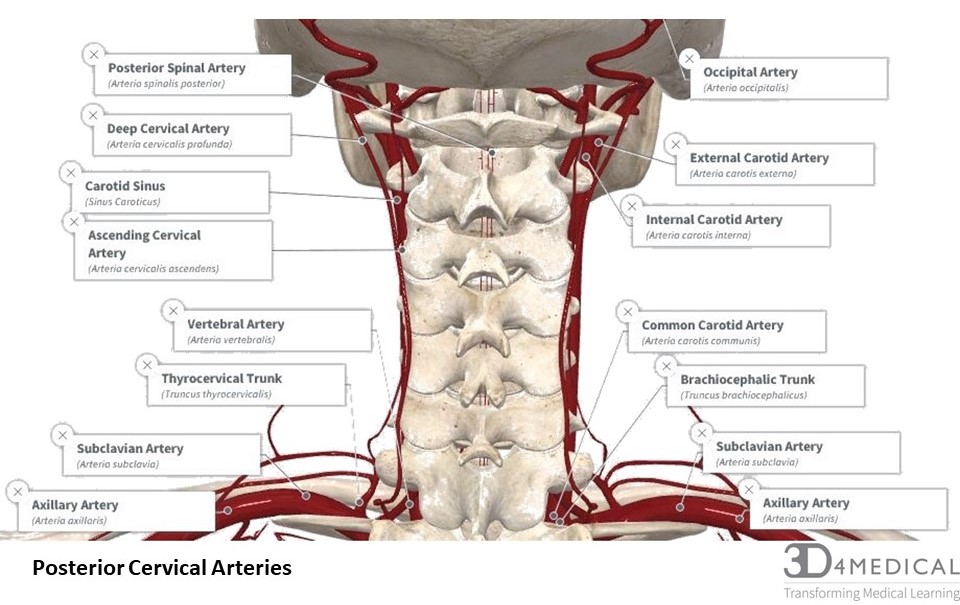 Internal Jugulars (right and left) are formed by the sigmoid and inferior petrosal venous sinuses and then descend to join with the brachiocephalic veins. The internal jugulars are the main venous return from the brain, face, and neck.

External Jugular Veins (right and left) are formed by posterior auricular and retromandibular veins and are joined by the transverse cervical vein, suprascapular and anterior jugular before merging with the subclavian vein.

Deep Cervical Veins are formed via anastomoses of the occipital veins and other small veins in the cervical region muscles such as the semispinalis capitis and the longissimus capitis. Before draining into the brachiocephalic vein, they join with the vertebral vein. 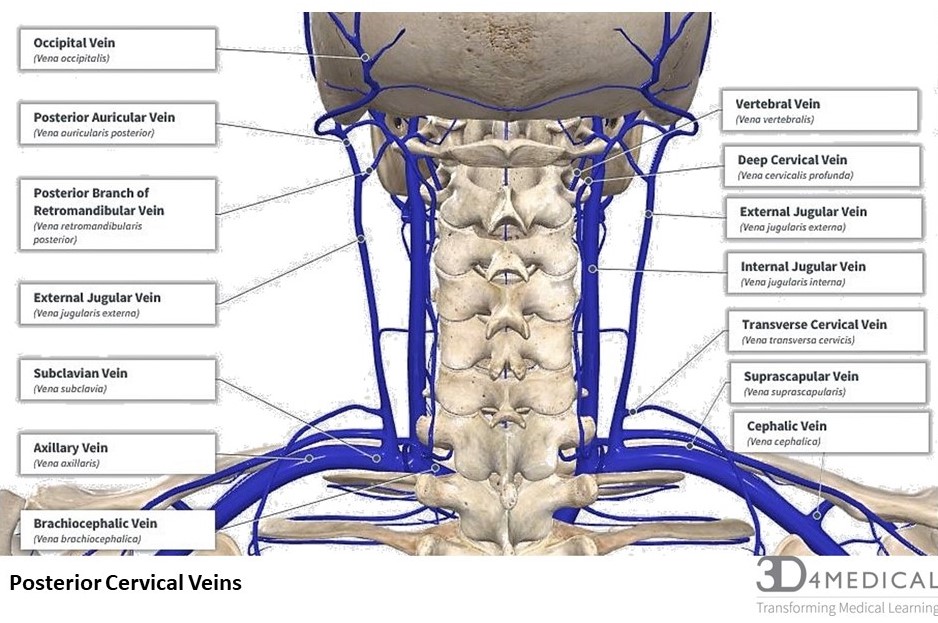 ANTERIOR CERVICAL ARTERIES
The arteries of the anterior neck surround the thyroid and other structures. They supply oxygenated blood to the laryngeal muscles as well as the supra and infrahyoid muscles. Starting from the aorta, the oxygenated blood will branch off to the brachiocephalic artery on the right side. This artery is unique as the left side does not have this feature. After the brachiocephalic artery, on the right side, the left and right sides divide into the common carotid, subclavian, and vertebral arteries. The subclavian artery goes to the arm and the vertebral artery goes to the brain along with the common carotid. For more information on what muscles are supplied by their respective artery, see the blood supply column in the muscles section of this region. 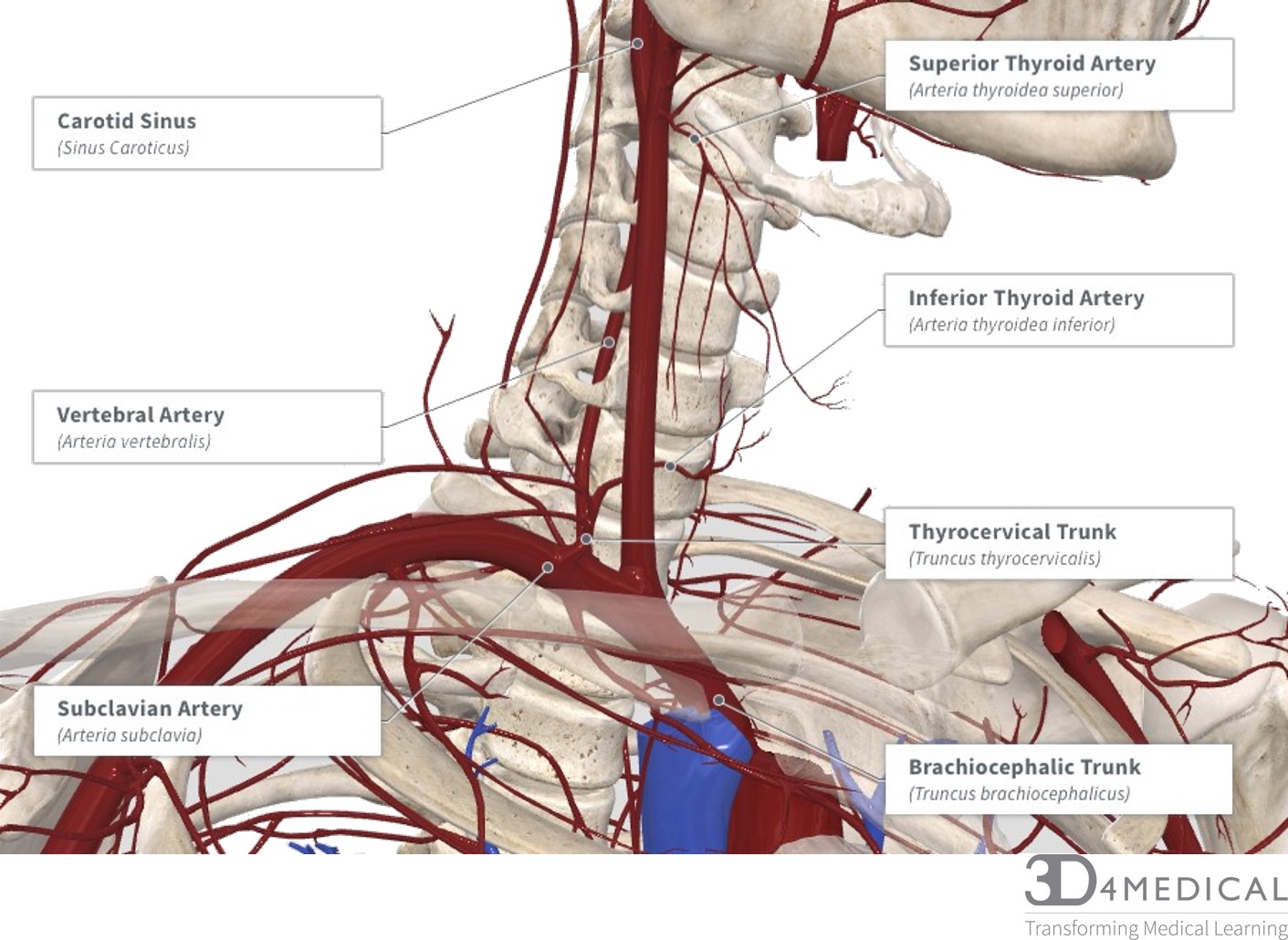 The lymphatic system is an essential part of the immune system. To simplify the system, it can be divided into 5 parts: vessels, valves, ducts, nodes, and organs. The picture below shows a vessels, duct, and node. There are many of these in the body and they are positioned uniquely to their region. Regardless of their position, they all have common purposes: to drain lymph to their respective organ(s), form plasma in the blood, and filter the lymph fluid. 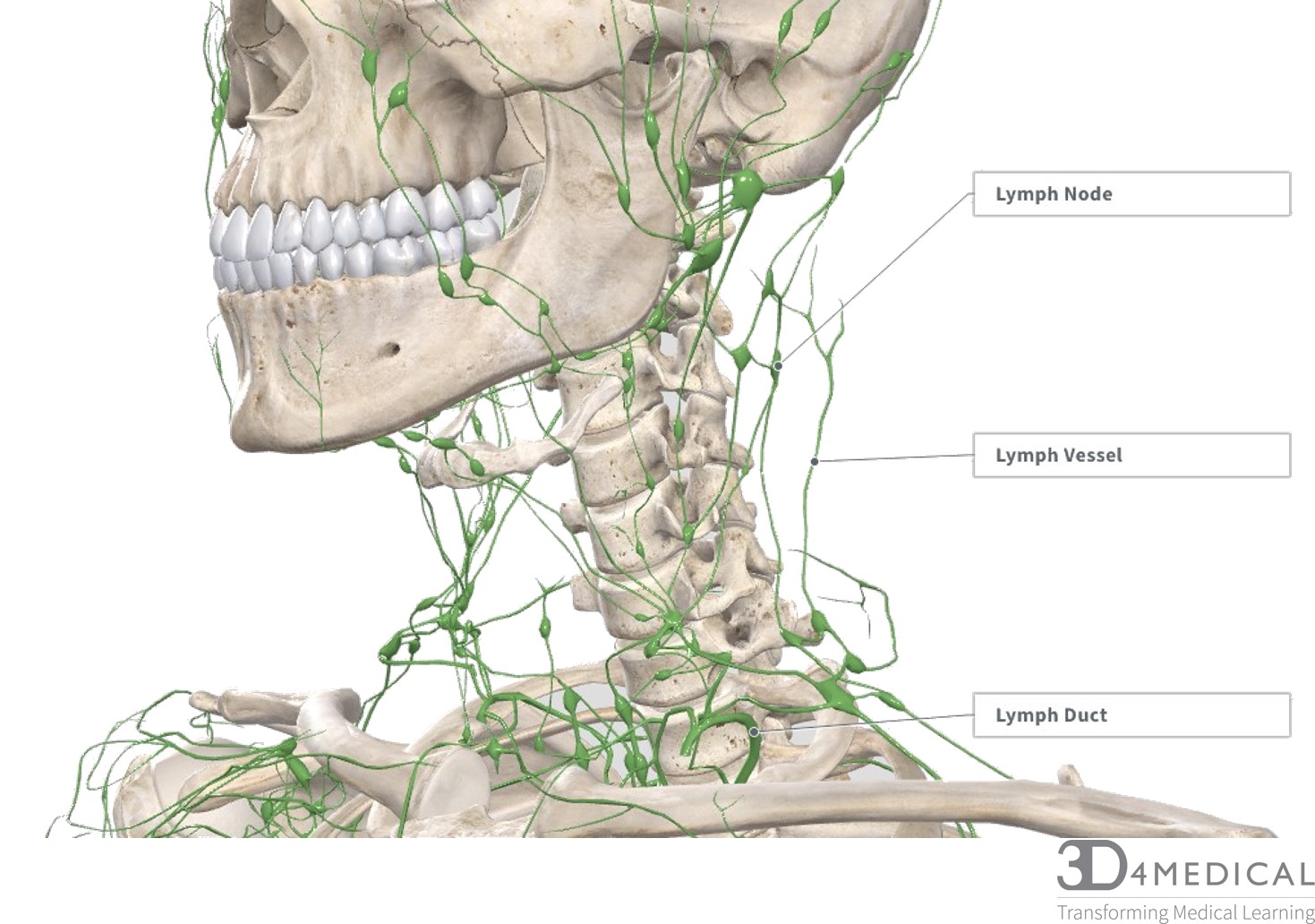