Muscles of the Pelvis 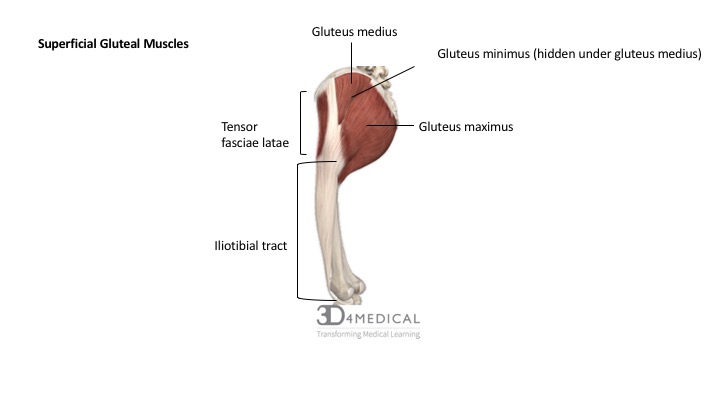 Figure 1. Diagram summarizing the muscles location of the gluteal group.

A heavily-pennated and densely-fibered muscle, the gluteus maximus is a complex muscle with a number of origins including the posterior gluteal line of the ilium, posterior surface of the sacrum, coccyx, aponeurosis of sacrospinalis ligament, the sacrotuberous ligament and the fascia covering the gluteus medius (gluteal aponeurosis). Approximately 75% of the gluteus maximus fibers insert into the iliotibial tract of the fascia latae, while 25% of the fibers insert into the gluteal tuberosity of the femur. 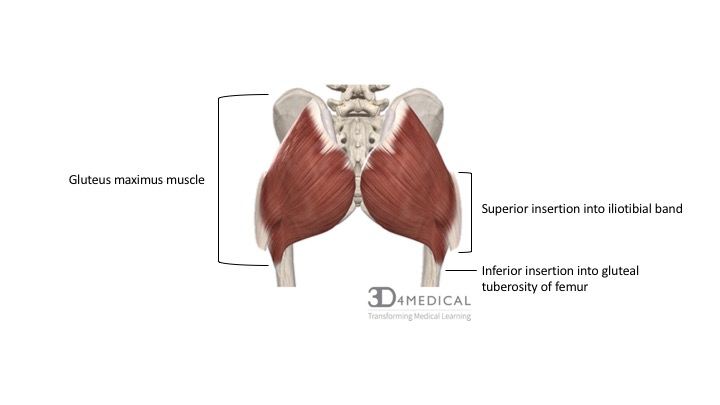 Given the wide range of origins, as well as a superior and inferior insertion, the gluteus maximus muscle performs a variety of actions including hip extension, lateral rotation (external rotation) and trunk extension when the distal attachment of the muscle is fixed. The superior fibers of the muscle also work through their connection with the iliotibial band to provide support to the knee during extension, while the inferior fibers of the gluteus maximus affect posterior tilt of the pelvis.

Although the gluteus maximus muscle is the strongest hip extensor and is predominantly activated during powerful or rapid force movements such as sprinting, stair climbing, or rising from a flexed to extended thigh positioning, it remains fairly inactive during walking and almost completely inactive during standing.

The gluteus maximus is innervated by the inferior gluteal nerve (L5 – S2).

Comparably smaller and laying deep to the gluteus maximus muscle, the fan-shaped gluteus medius and gluteus minimus muscles both originate on the external surface of the ilium and have similar insertion points on the greater trochanter of the femur.

The primary actions of the gluteus medius and gluteus minimus are hip abduction and medial rotation. They also work to contribute to hip stability particularly during single-leg stance movements and to increase the congruency of the femoral head within the acetabulum.

Both the gluteus medius and minimus are innervated by the superior gluteal nerve (L5 – S1).

Due to the anterior location on the ilium, the TFL works synergistically with the iliopsoas and rectus femoris to perform hip flexion, medial rotation of the hip and also tenses the iliotibial band to provide lateral knee stability.

The tensor fasciae latae is innervated via the superior gluteal nerve (L5 – S1).

The superior origin of the IT band is spliced into two layers that blend with both the TFL and the tendinous insertion of the gluteus maximus muscle. The IT band spans the lateral surface of the femur, crossing the knee joint and inserting onto the lateral tibial plateau of the tibia. 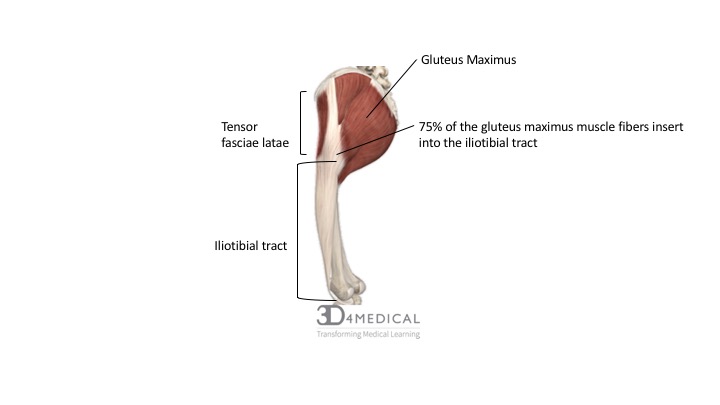 Based on its lengthy span from the tensor fasciae latae to its insertion at the lateral epicondyle of the tibia, the iliotibial band functions as an abductor, medial rotator and flexor of the thigh. Collectively, the tensor fasciae latae, gluteus maximus work through the iliotibial band to stabilize the knee during extension phases of standing, walking, running and biking.

The iliotibial band is innervated by the inferior gluteal nerve (L5 – S2).

As their name “the lateral rotators” dictates, their primary action is lateral (external) rotation of the hip. In conjunction with the surrounding hip ligaments, the lateral rotators work to maintain hip-joint stability via increasing the congruency of the femoral head in the acetabulum. This role is much like that of the rotator cuff muscles in the upper limb that provide stability of humeral head within the glenoid fossa at the glenohumeral joint. 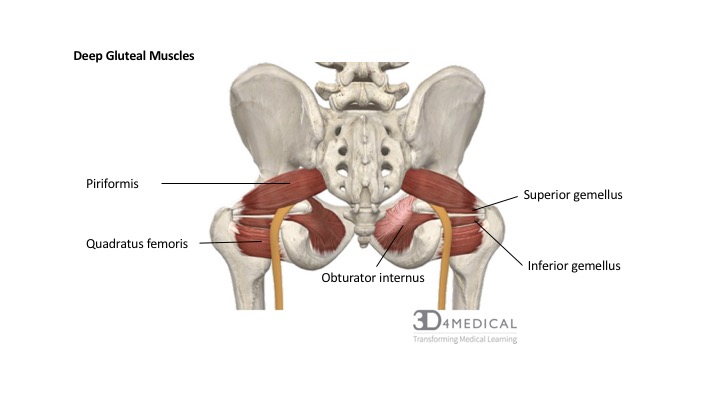 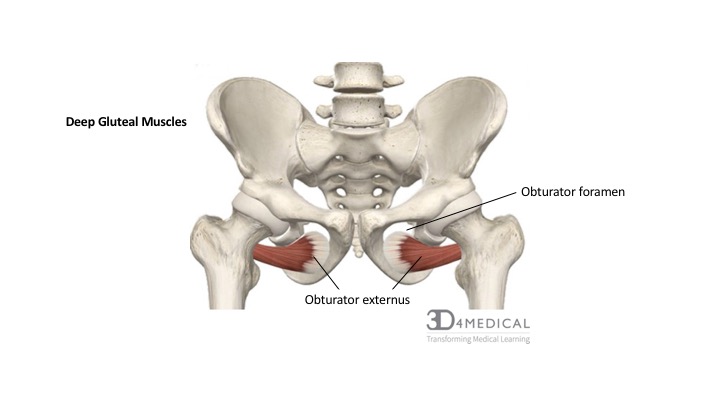 Figure 10. Diagram demonstrating the anterior view of the obtruator externus location on the pelvis to the femur.

Laying deep to the gluteus maximus is the piriformis, a flat, pear-shaped muscle originating on the anterior surface of the sacrum and spanning inferolaterally through the greater sciatic foramen towards its insertion point on the superior border of the greater trochanter of the femur. 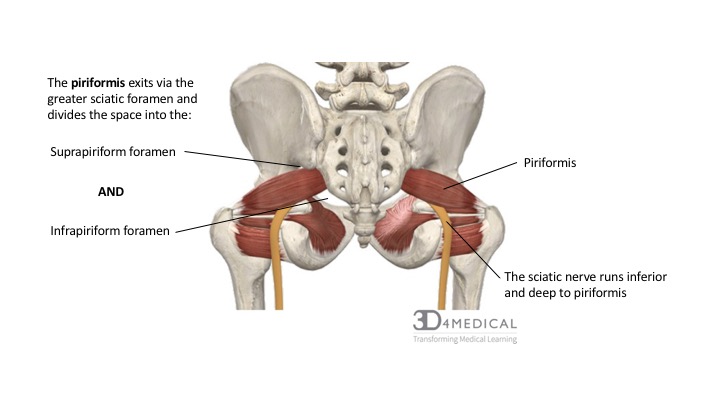 Figure 11. Diagram demonstrating the posterior view of the piriformis muscle orientation, origin and insertion on the pelvis and femur.

The piriformis is responsible for lateral hip rotation, abduction when the hip is flexed, a small amount of hip extension, as well as for providing stabilization of the femoral head within the hip joint.

The piriformis innervated by the nerve to piriformis, derived from the spinal nerves of S1 – S2.

Known as the triceps coxae or the triceps (three-headed muscle) of the hip, the obturator internus, superior gemellus and inferior gemellus all unite to fill the space between the piriformis and the most inferior lateral rotator, the quadratus femoris.

The smaller and slender gemelli (superior and inferior) originate on the ischial spine and ischial tuberosity of the ischium, before travelling in a horizontal fashion to insert into the intertrochanteric crest of the femur along with the obturator internus. 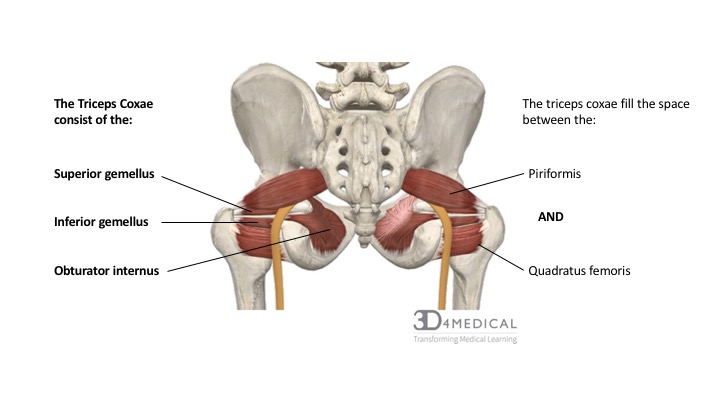 Figure 12. Diagram demonstrating the posterior view of the superior and inferior gemellus muscles origin and insertion on the pevlis and femur.

The obturator and both gemelli (the triceps coxae) function synergistically to produce lateral hip rotation. These muscles can produce movement only when all three are functioning. Individually the obturator internus, superior gemelli and inferior gemelli are incapable of producing movement.

Despite this shared insertion point and the close proximity of these muscles, the obturator internus and gemellus superior share a common innervation via the obturator nerve (L5 – S2), while the gemellus inferior is innervated via the nerve to the most inferior lateral rotator, the nerve to quadratus femoris (L4 – S1).

The obturator externus muscle is the most anteriorly situated on the pelvic girdle of all the deep lateral rotators. Because of its location, posterior to pectineus and the origins of the adductor muscles, it is often grouped with the adductor muscles.

Flat and fan-shaped, the obturator externus is a deep muscle originating from the external surface of the obturator membrane and margins of the obturator foramen, passing under the acetabulum and femoral neck to insert of the posterior aspect of the greater trochanter (trochanteric fossa). 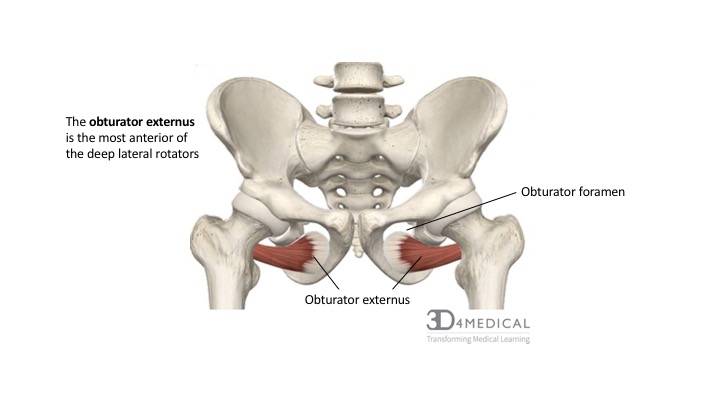 The obturator externus is responsible for lateral (external) hip rotation and is activated primarily when the hip is flexed.

Obturator externus is innervated via the obturator nerve (L3, L4). 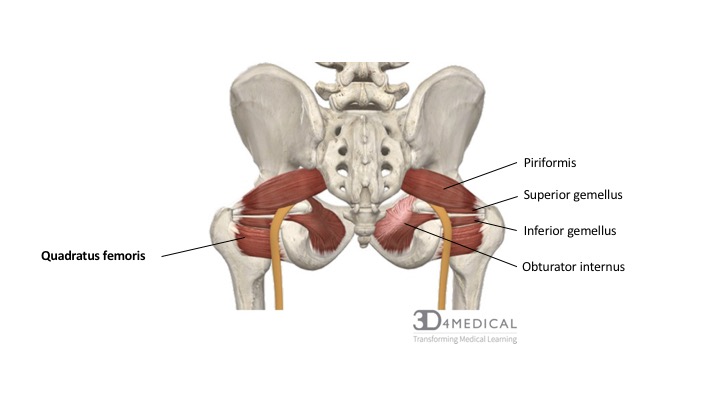 Figure 14. Diagram demonstrating the posterior view of the muscles in the lateral rotator group.

The quadratus femoris is one of the stronger lateral hip rotators and also effectively functions to adduct the hip.

Muscles of the Pelvic Floor.

The video below depicts a cadaver dissection of the perineum and pelvic floor. The video is directly from the University of Wisconsin School of Medicine and Public Health.

Layer Two: Urogenital Diaphragm (Deep to Urogenital Triangle): The urogenital diaphragm is a strong muscular membrane that sits between the symphysis pubis and ischial tuberosity. It stretches across the triangular anterior portion of the pelvic outlet. It is located inferior and superficial to the pelvic diaphragm.

The pelvic diaphragm is a wide and thin muscular partition of tissue that forms the inferior border of the abdominopelvic cavity. It separates the pelvic cavity above from the perineal region below. The pelvic diaphragm is made up of the urethral sphincter (sphincter urethrae), deep transverse perineal, the perineal membrane and in females, compressor urethrae and sphincter urethral vaginalis.  It is made up of a wide, funnel-shaped sling of fascia and muscle. It spreads from the symphysis pubis to the coccyx and across from one lateral sidewall to another. The pelvic diaphragm is supplied by the ventral rami of sacral nerve 3 & 4. It functions as a support system for the pelvic viscera, resists increases in abdominal pressure, and aids in micturnutation (passing of urine).

Other Muscles of the Pelvic Floor

The video above depicts the muscles of the pelvic floor. It can be found at: https://www.youtube.com/watch?time_continue=165&v=P3BBAMWm2Eo